The holidays are fast approaching (how on EARTH did Thanksgiving sneak up like that?) Here is a collection of our favorite science magic tricks to entertain while the turkey is cooking and long after the wish bone is broken. 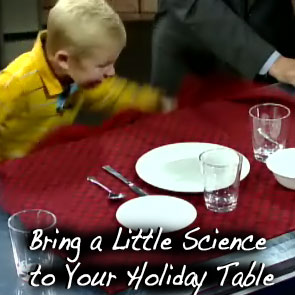 Tablecloth Trick
The table is beautiful. Everything is in it’s place. Aunt Anne’s china sits awaiting a feast. It’s time to rip the tablecloth out from under the dishes and wow the crowd. The Tablecloth Trick works because of inertia. Newton first described inertia as the tendency for an object at rest to remain at rest until a force acts upon the object. Inertia for an object in motion is the tendency for that object to remain in motion, unless a force acts upon the object. In terms of the Tablecloth Trick, inertia is important because, according to the law, the objects (the stuff on the table) will not move unless an outside force moves them. This is known as Newton’s First Law of Motion.

If you do it just right, everyone will be amazed. Next time your mom asks you to clear the table, do it with flair!

Toothpick Star
Don’t take your eyes off of these “seemingly normal” toothpicks, they might just have some magic in them! Five bent toothpicks will change positions to make a five-pointed star using nothing but a little water. You’ll have all the people around the dinner table holding their breath as the toothpicks glide into place without being touched. You’re a dinner table magician!

Density Tower
With this trick, you’ll put a new spin on our famous Density Column demonstration. First, we’ll teach you how to make layers of liquid sit on top of each other. This density demonstration looks cool, but what if you could make different objects float in the middle of those cool looking liquids? You’ll impress yourself and your friends with what you can do with your Density Tower. 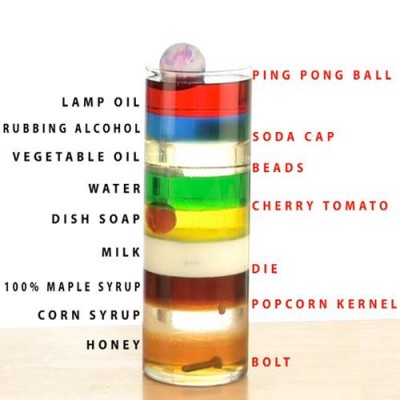 Balancing Forks
Gather up a few pieces of silverware and some other odds and ends as you prepare to amaze your dinner guests with this gravity-defying trick. It’s a guaranteed hit at your favorite restaurant. You’ll either get a free dessert or you’ll get kicked out. That’s the price you pay for stardom.

Liquid Layers
Who would have thought that playing with your food as a kid would lead to a cool science experiment as an adult? Better yet, it will keep the kids occupied for hours. The challenge starts with four different cups of colored water and a clear straw. When you mix red and blue liquid together, you get purple… right? Not so fast. How about a layer of blue liquid sitting on top of the red? Add two more colors and you have four layered liquids in one straw. The secret is density… and a steady hand. 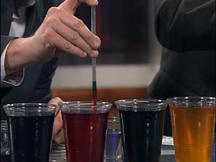 The Egg Drop
The Egg Drop is a classic science demonstration that illustrates Newton’s Laws of Motion, namely inertia. The challenge sounds so simple… just get the egg into the glass of water, but there are a few obstacles. The egg is perched high above the water on a cardboard tube, and a pie plate sits between the tube and the water. Still think it’s easy? Sir Isaac Newton does.

Move a Match with Your Mind
The ability to move an object with your mind is called telekinesis. Magicians and psychics claim to have this amazing ability… and you will too once you’ve learned the science secret behind the Sympathetic Match trick. If you like to annoy all of your dinner guests by running your finger along the rim of a wine glass to make it sing, you’ll soon have your friends convinced that you can move objects with your mind!

Musical Straws
So, you’re waiting for your dinner to arrive and you’re bored out of your mind. There’s nothing to read… the conversation is slim to none… and you’ve already counted all of the sugar packets. Hmmm? There’s a straw… and straws are interesting. Is there anything you can do with a straw to “be amazing?” Keep reading – in a matter of minutes you’ll have the entire restaurant upset by your science antics. 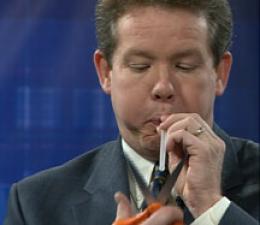 Seven Layer Density Column – Science Burrito
Anyone can stack blocks, boxes, or books, but only those with a steady hand and a little understanding of chemistry can stack liquids. What if you could stack seven different liquids in seven different layers? Think of it as a science burrito!

Singing Glasses
What dinner party is complete without a song from the Wine Glass Symphony? You’ll need a few wine glasses, some water, and a tune in mind to demonstrate the sounds of science. Amaze everyone and display incredibly bad manners all at once. 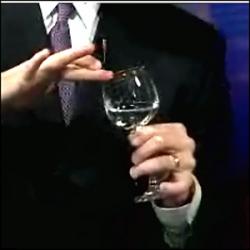 Color Changing Milk
It’s an explosion of color! Some very unusual things happen when you mix a little milk, food coloring, and a drop of liquid soap. Use this experiment to amaze your friends and uncover the scientific secrets of soap.

Coffee Cup Pendulum
There’s a strong possibility that Steve Spangler’s swinging table tricks might come to a crashing halt. It’s a test of Steve’s scientific skill and Mark’s quick reflexes. Grab a coffee cup and a spoon and prepare to amaze your dinner guests.