The popularity of news stations having their own “science guy” has increasingly grown over the years. Steve gets a number of requests to take his Science Mondays segments from 9News KUSA on the road. When his station manager made the request for him to visit their sister station in Sacramento, Steve packed up some of his favorite science demos and hit the road. The funny part is that the news anchors at News10 KXTV had no idea what to expect. Judging from the looks on their faces (and a few screams), Steve surprised them all. Steve gives the Sacramento anchors several attention-grabbing science lessons – 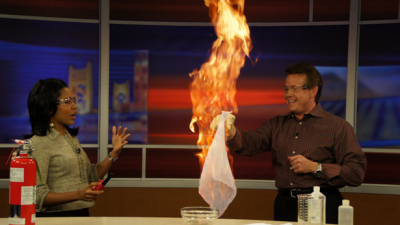 No video is available for this segment, but you can see the photos and read all about it on the KXTV website.

Television’s “Who Wants to be a Millionaire” Called Today…

Staff Spotlight on Lisa Brooks – Yes She IS Related to Steve

We Hit the Target with Science
1 reply