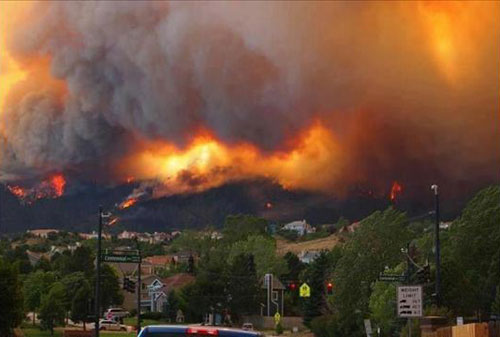 We are in the midst of one of the worst fire seasons in Colorado history and it’s still June. At present time, there are 10 major fires burning across the state. One, the Waldo Fire, is burning within the city limits of Colorado Springs. Another, the High Park fire, is burning near Fort Collins and has destroyed almost 250 homes.

So far this season, Colorado wildfires have burned acreage as big as the City and County of Denver. But what does it all mean? How do wildfires burn and grow? The fire in Colorado Springs grew from just over 6,000 acres on Tuesday to over 15,000 acres on Wednesday. Firefighters said there was a firestorm that pushed the fire to grow faster than expected.

Watch this timelapse video of the fire over five days. If you skip ahead to about 7:30 in the video, you can really see the firestorm and the weather system created by it.

A firestorm is a fire that is so intense that it creates and sustains its own wind system. A natural phenomenon, firestorms are created during some of the biggest wildfires. A firestorm is created as the heat of the fire draws in more and more surrounding air. If a low level Jet Stream exists near or over the fire, the air is drawn in even faster. As this occurs, strong, gusty winds develop around the fire, pulling the air inward supplying the fire with additional oxygen. The strong winds change direction erratically. The circulating wind can create fire tornadoes which quickly spread the fire to areas outside of the burning fire. 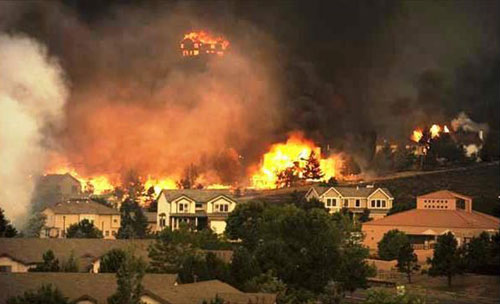 The firestorm continues to pull in great quantities of oxygen, increasing combustion and increasing the heat. The intense heat can ignite flammable material at a great distance ahead of the fire. This helps the fire grow quickly and increases the intensity.

People and animals near a firestorm can die from lack of oxygen.

Heat from the fire can melt asphalt, metal and glass.

Like the Waldo Canyon fire on Tuesday, Wildfires can take on a life of their own, tearing over ridges, changing direction and fighting to survive.

A fire needs fuel to burn, air to supply oxygen and a heat source. This forms a fire triangle. When fighting a fire, firefighters work to take away one of the pillars of the triangle, they can control and put out the blaze.

Weather also plays a huge part in wildfire birth, growth and death. Temperature, wind and moisture affect wildfires and make it harder to fight them. Drought obviously leads to favorable fire conditions. Moisture can slow the fire down. Wildfires tend to rage in the afternoon after sunlight heats sticks, trees and leaves on the ground. The radiant heat dries fuels and allows them to ignite to burn faster. Cooler temperatures help the fire lay down and give firefighters the upper hand in gaining control.

Wind has a huge impact on wildfires adding additional oxygen and pushing the fire faster. It is also unpredictable, changing a fire’s direction without warning. 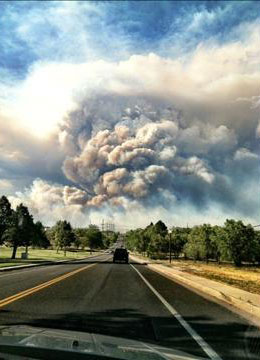 More than 30,000 people are currently on evacuation orders north and south of Denver. The High Park fire is so big, firefighters are estimating it may take until the end of July to contain it.

What does it mean to contain a fire?
Control lines are constructed or natural barriers at the fire’s edge used to control a fire. Firefighters manually dig lines around the edges of a fire. The goal is to keep the fire from jumping the line and continuing to grow. Rivers and roads are also used as containment lines. Lines do not always work and fires can jump to continue burning. A fire can go from 50% contained to 30% contained if a fire line is jumped.

Strong winds can blow embers over 1/2 a mile and ignite spot fires out and beyond the main fire. This is very dangerous for firefighters as they can become trapped between the two burning fires. 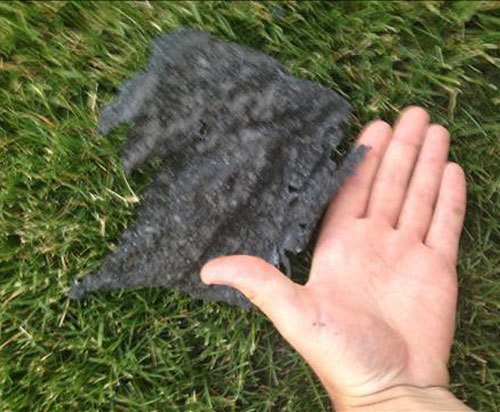 Firefighters also set back fires. These fires are set to burn back towards the wildfire to create a burned zone and containment area.

MAFFS
Modular Airborne Firefighting Systems that are inserted into military C-130 aircraft that converts them to large airtankers when needed. The C-130’s can drop up to 3,000 gallons of fire retardant on wildfires. The entire load can be dropped in under five seconds. The U.S. Forest Service has a total of eight MAFFS in its fleet.

Airtankers deliver fire retardant to slow the growth of wildfires and reduce their intensity to assist firefighters constructing containment lines on the ground. Wildfires are stopped by the containment lines. The fire inside the lines usually burns itself out.

Helicopters are also used to drop retardant or water to assist firefighting efforts on the ground. 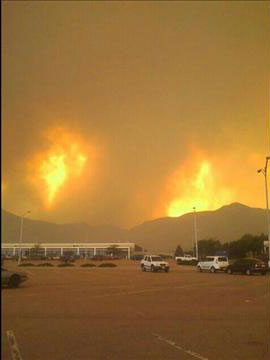 What Happens During Mop Up Stage:

Mop-up happens after any part of a fire is controlled. It makes the fire safe by extinguishing fires and removing burning materials. Firefighters put out smoldering materials and make sure burning fuel is burned out or buried to stop sparks from traveling. They also clear fire lines of hanging branches, brush and logs to ensure the fire is contained.

Infrared scanners on helicopters or other aircraft are then used to detect hot spots to aide the mop up process. 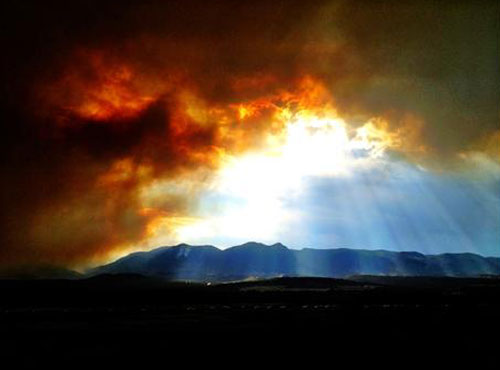 Combustion:
A sequence of chemical reactions between a fuel and an oxidant. Heat and light are produced from the reactions in the form of flames or a glow.  In rapid combustion large amounts of heat and light energy are released.

Controlled Burn:
A technique used by forest service or firemen to burn excess fuels like grass or bush to prevent wildfires or restore grassland or forest ecology. Fires can stimulate germination of some forest trees and in turn promote a healthier ecosystem.

Firestorm:
A wildfire that is so strong and intense, it creates it own winds.

Fire Tornado:
Like a wind tornado but is made of fire. As the heated air from the fire rises, strong air currents (often whipping through the trees) cause the air molecules to spin (often referred to as angular or rotational momentum) which shapes the flame into the shape of a tornado. This catches the tops of trees on fire and the fire jumps from tree top to tree top.

Smoke:
Small particles suspended in air from an incomplete combustion of fuel.

Smolder:
A flameless form of combustion that gets its heat from oxidations on the surface of a fuel. Many materials can smolder – coal, tobacco, wood, fuels on the forest floor like peat and cotton clothing.

For more information on the science wildfires, check out these great links:

* Thanks to Science Daily and Wikipedia for assistance in wildfire definitions. Thank you to 9News in Denver for the stunning images.

Teachers Making a Difference – Mrs. Z and her Oobleck Pool of Goo

The Science of Wildfires

The Science of Tornadoes