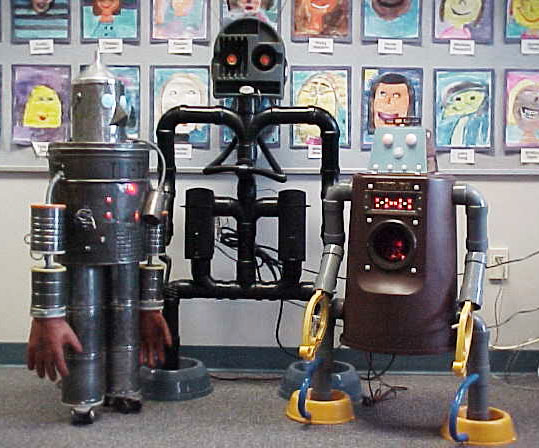 Very few teachers have teaching assistants who don’t ask for lunch breaks. Most won’t work for free either. Ted Gamble, a 3rd grade teacher at Meredith Hill Elementary School in Auburn, Washington, may have the most unique aides in his class.

They don’t ask for lunch breaks because they don’t eat or breathe.

No need to interview and hire these teaching assistants. Mr. Gamble has built his own. Meet the THX family, Silver Rocket and Ion Dauphin. They assist in the classroom by taking attendance, reading stories, giving spelling and math tests, making announcements and reminding students of important events. They also make cool sound effects and play music when prompted.

The robots can get a little bossy at times, but the students don’t mind.

Mr. Gamble designed and built the robots with help from laptops donated by Pixar, The Seattle Times, Washington State and Warehouser.

All of the robots have names and special talents, although Mr. Gamble says they aren’t robots in the true sense. They are constructed from materials and made to look like robots. The faux robots have speakers built into them that are connected to laptops running sound effects, speech and voice recognition software.

Mr. Gamble says, “it is the children, who have such wonderful and creative imaginations, which allow them to ‘see’ my creations as real robots which converse with them.”

This is one teacher who inspires his students, nurtures their imaginations and makes learning fun.

Are you ready to meet the robots? Robot roll call –

THX-T2 was the first robot created by Mr. Gamble over 30 years ago after he saw Star Wars. Built before computers were available, THX-T2 has a potato chip can for a body,  a paint can and funnel for a head, and coffee cans for arms and legs. He originally had a tape recorder inside his chest, which was used to deliver messages during the school day. Mr. Gamble would record the voice for THX-T2 the night before by speaking into a vacuum cleaner hose. During the school day he would use a long electrical cord and switch to deliver the messages via THX-T2.

THX-T2 has been refurbished for the 2000’s complete with multi-media speakers and a laptop donated by the Seattle Times. He is still in charge of the daily announcements.

THX-T3 was built by Mr. Gamble and his wife while they were teaching in Japan for the Department of Defense in the early 1980’s. THX-T3 has dog food dishes for feet, futon clips for hands, a garbage can for a body with a butter dish with lights mounted in his chest. His arms and legs are made from Japanese drainage pipe, and his head is made from a Japanese house vent. Plastic wine bottle caps and lights are used for eyes. A toothbrush holder serves as an antenna.

THX-T3 had a cassette recorder inside that was operated by remote control – a big improvement with new technology.

In 1986 Mr. Gamble returned from Japan and after a few short stints outside of education, returned to the classroom and built THX-T4 and THX-T5 along with refurbishing and updating the earlier robot models so they could also be run with computers. 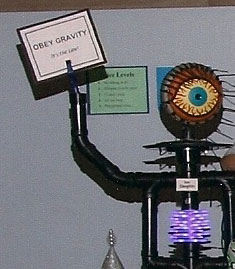 THX-T4 has special software donated by Apple, which enables it to hold limited conversations and give the time and date when asked.

Mr. Gamble then wanted a tall robot. Ion Dauphin (eye on the fan) was born and built to move. Ion is made from a Frisbee with an eye, a remote controlled fan, a drainage pipe, an IKEA lamp, and small wheels. Ion Dauphin is a tad negative and always shakes his head no when asked a question.

Mr. Gamble’s newest and latest creation is a flying saucer hovercraft. It will double as a study carrel and float around the school. This is something Mr. Gamble has wanted to build since the 3rd grade. He loved reading about UFO’s and was inspired after a UFO incident that took place over the White House in 1953.

Everyone at Steve Spangler Science wants to find a way back to 3rd grade just for a chance to be in Mr. Gamble’s class. We are hoping he will accept a few new students who may be pushing 20, if not 30 and beyond.