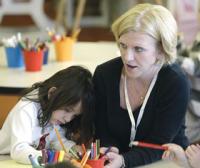 Just stick your head above the crowd and someone will shoot at it. One Colorado elementary teacher is getting hit in the head with flying film canisters powered by water and Alka-Seltzer… and the kids are being praised. Colorado Association of Science Teachers selected Shannon Koppenfafer as the Science Teacher of the Year for the state’s elementary school teachers. She was nominated by John McConnell, the Grand Valley’s version of Mr. Science who runs the Western Colorado Math and Science Center.

Here’s a secret that I learned years ago… constantly seek out amazing teachers. Read about them… watch them in action… study their writings… find out what makes them tick. As teachers, we all benefit when one of our own receives this type of well-deserved recognition. She’s been teaching for eight years, mostly at Grand Junction’s New Emerson. Every day is something new, usually something new a kid thought up.

“The kids make it new,”? she said. “I don’t think we give kids enough credit. They can do much more than we ask of them.”?

She doesn’t spend a bunch of time on student discipline. The kids want to do what she says because it’s always interesting. Her kids achieve, which leads us back to her being tabbed by the Colorado Association of Science Teachers as the Science Teacher of the Year.

Right now she’s handling a herd of kindergartners every day. They’re trying out all kinds of life with all kinds of different experiments.

It’s pretty basic stuff “” predicting/hypothesis, observing and concluding “” the elements of science at all levels.

The Earth and its atmosphere is still comprised of solids, liquids and gases. No matter how much stuff Western civilization pumps out, those three elements never change.

“We help them come up with the questions. The answers tend to be immediate,”? said Koppenhafer. “They’re very concrete at that age. They need a response and an answer right away.”?

She regularly heads to the idea bank of Steve Spangler, a Denver teacher, and insists that lots of Grand Valley teachers are doing the same things she is. If you’re a science teacher it helps, she says, that the Western Colorado Math and Science Center is in the same building.

It also helps if the experiments climax with a pop or bang.

Like the film canister with a little water and an Alka Seltzer tablet in it. Pour in a little water, drop in the tablet, clamp down the lid and wait. The kids learn that if you can’t see it, it can’t be a solid or liquid, which leaves gas.

“It doesn’t take long,”? said Koppenhafer. “The gases expand and the lid pops off. It’s a pretty popular experiment.”?

Sometimes they take the longer view.

If you stick pumpkin seeds in a test tube with water and a paper towel, they’ll grow. Eventually you’ll have to transplant them in actual dirt to keep them alive. The conclusion to that experiment is that the kids learn what it takes to grow, and that all kids want their seeds transplanted.

No one wants theirs to die.

You learn that kids can make little sun-powered cookers to grill health food like hot dogs and marshmallows. It didn’t work so well the first time they tried it, unless you’re a big fan of lukewarm hotdogs and tepid marshmallows.

One kid hypothesized that since light colors repel heat and dark colors attract heat, and since marshmallows are white and chocolate bars are dark, maybe chocolate bars would work better.

So they tried it.

And you know what?

The kid was right. You can cook a chocolate bar in a solar-powered cooker made by a kindergartner.

“Kids are naturally curious,”? said Koppenhafer. “If we tap into that and help them look for their own answers, they’ll surprise you with some of the ideas they come up with.”?