From the moment the gates opened at 9:30 AM, there was an air of excitement that ran through Coors Field, home of the Colorado Rockies. The event was billed as the largest hands-on science show ever presented in Colorado… or maybe the country for that matter. In 2009, the Colorado Rockies teamed up with 9News KUSA-TV and Steve Spangler Science to produce the first annual Weather and Science Day, which drew a crowd of 5,400 and earned the Spangler team their first Guinness World Record for the World’s Largest Physics Lesson. 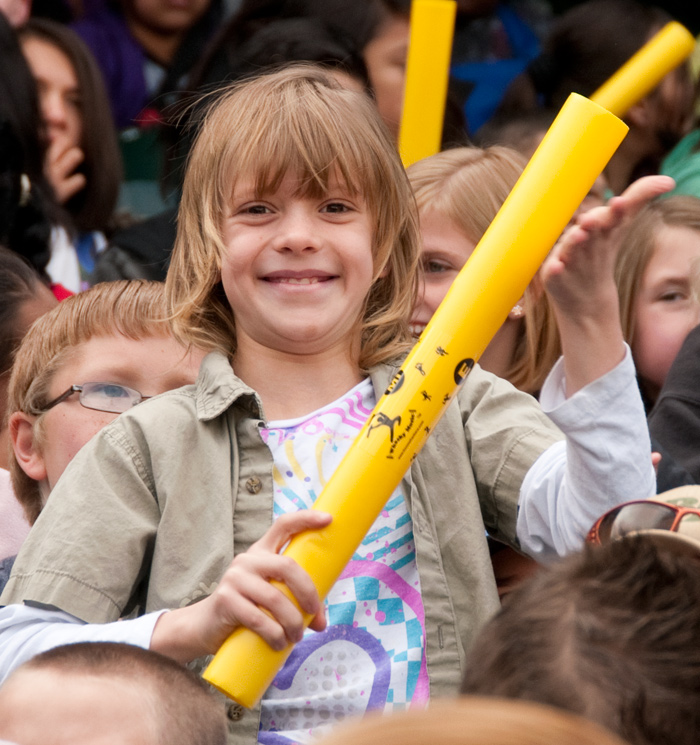 Ticket sales to this year’s event were in excess of 10,000, making this a real challenge for the Steve Spangler Science team. “When we originally sat down and starting planning the event with Steve, he challenged us to help him create something more than a sit-and-watch show,” explained Carly Reed, special event coordinator at Steve Spangler Science. “Steve suggested pony rides in the parking lot, but we quickly refocused his creativity to something more doable.” The final decision was ambitious, but not completely out of the question. “Let’s give each person a BoomWhacker and teach the world’s largest lesson on the science of sound,” Steve Spangler commented while frantically looking for the phone number to the BoomWhacker headquarters in Fort Worth, Texas. The biggest hurdle would be to come up with a way to quickly distribute all of the plastic tubes to an audience of this size. Game on!

If you’re wondering… BoomWhackers are plastic tubes that vary in size and color and can be used to play different notes by “whacking” them on your hand. Each person who attended Weather and Science Day received a single BoomWhacker to use later in the presentation. 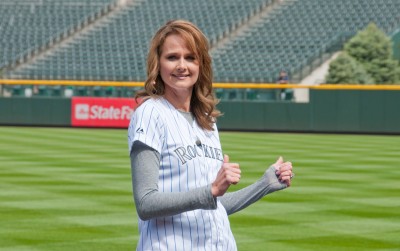 Kathy Sabine, Chief Meteorologist at 9News kicked-off the event with a behind-the-scenes look at the weather center at 9News. Video played on the Jumbotron as Kathy shared her experiences predicting Colorado’s unpredictable weather. “The scientific method is a part of everything I do as a meteorologist,” said Kathy Sabine. “Colorado’s extreme changes in weather keep me on my toes as I use our weather models to make the most educated guess possible as I predict what’s going to happen.” 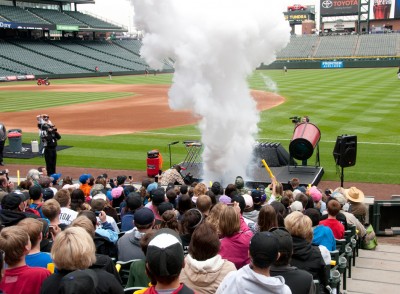 Kathy Sabine and Steve Spangler are long-time friends who have been working together at 9News since 2000. Kathy knows first hand what it means to be a part of one of Steve’s big demonstrations (she’s done her fair share of screaming while exploding pumpkins, being vacuumed packed or walking on glass). Steve started by asking his 9News colleague Amelia Earhart to find volunteers in the audience who could answer a few science questions. The answers to these questions about the air we breathe and how temperature affects the states of matter set the stage for a spontaneous eruption of an enormous liquid nitrogen cloud that literally consumed both Steve and Kathy (who eventually reappeared to a large round of applause). 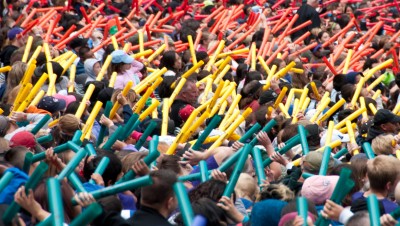 The sounds of science were up next as everyone in the audience participated in a lesson on sound waves, pitch and volume. Steve used the pentatonic scale (C,D,E,G,A,C) to demonstrate rolling rumbles of sound that changed in pitch and volume. “I couldn’t believe how cool the sound was when we were actually doing the activity,” said Shelly Flenner, a sixth grade teacher from Aurora, Colorado. The lesson on sound came to a crescendo with the formation of a giant drum circle. From that point forward, standard applause was replaced with a sea of BoomWhacking sounds. 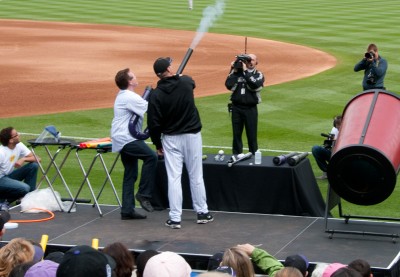 Matt Reynolds from the Colorado Rockies joined Steve Spangler on stage for a lesson in high-flying objects… specifically limes! Specially made launchers were used to test the difference between shooting limes using combustible gases or compressed air. Matt fired a total of six limes to outfielders who tried their best to catch the high flying objects. The compressed air launcher won the challenge with the lime flying over the Rock Pile seating eventually landing in an open field.

Kathy Sabine returned to the stage to talk more about Colorado’s extreme weather.

Microbursts are a phenomenon common to Colorado whereby a sinking column of air moves downward until it hits the ground, eventually spreading out in all directions. Upon hitting the ground, a microburst often forms a giant vortex ring. Steve and Kathy used a variety of smoke ring launchers to demonstrate the properties of a vortex ring, but unlike a microburst, these smoke rings traveled across the field… or into the audience where kids could hardly wait to get hit! Steve mentioned that the large smoke cannon came from a firm in Minnesota called Colle+McVoy who were kind enough to loan the cannon to him for both the Ellen Show and this event. 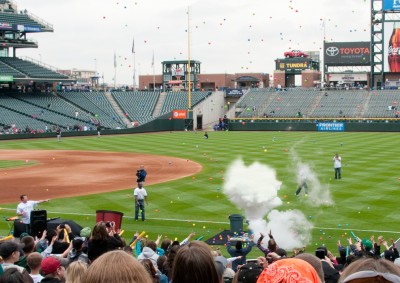 Steve turned everyone’s attention to his many helpers on the field for the big finale… his trash can kabooms! Coming full circle to his liquid nitrogen demonstrations at the beginning of the program, Steve talked about the science behind an explosion. “In simplest terms, an explosion is a sudden release of energy accompanied by a raid increase in volume,” Steve explained as his demo team took their positions behind each of the large trash cans. Liquid nitrogen was confined in a small container to demonstrate the sudden release of energy. Each trash can was filled with lightweight plastic balls like the ones found in a ball pit. The final result was a giant kaboom accompanied by a colorful shower of plastic balls flying through the air. What a great way to signal the end of the second annual Weather and Science Day.

In a post-show interview with Becky Ditchfield from 9News, Steve Spangler responded to a comment made by President Obama during a recent interview with Mark Zuckerberg at Facebook headquarters. “President Obama said that he wanted to make science cool… and I think we’ve got a few thousand people here in Colorado who can help him reach that goal. It starts with parents and teachers finding creative way to make learning fun. Events like this can only help kids foster a sense of wonder and a genuine desire to want to explore new things.”

Teachers Save 20% – Thanks for All You Do in the Education of Our Children
Registration Now Open – Hands-on Science Boot Camp Dates and Cities Set for 2009
Mysterious Floating Water Science Experiment
When the tie dyed lab coat comes out, it’s time for science
Bubble Bubble on the Wall, Who's the Squarest of Them All?
Geyser Tube Toy Helps Set New Mentos Geyser World Record
Science Fair 911 – Demonstrations vs. Experiments
Scientific Explorer Lawsuit Settled
5 replies