I received a phone call in early December from a good friend, RC Myles, asking if I could “go to lunch” on April 29th. Either this guy’s calendar really books up fast or he’s an early planner. It turned out that neither was the case since RC was calling to share the good news that I was the 2010 recipient of the Arapahoe Community College Foundation’s Promoting the Power of Education Award. RC Myles and his family have been long time supporters of the ACC Foundation which raises money to support student scholarships and creates opportunities for people who have a passion for life-long learning. 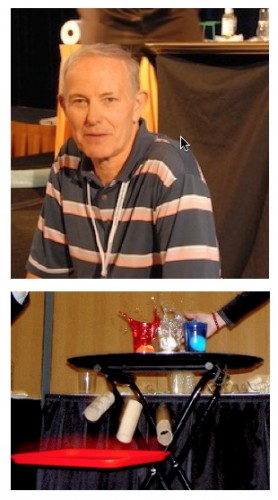 I cannot begin to tell you how horned I am to have received the award and the recognition from the ACC Foundation. During my remarks after lunch (accompanied by a few science demos… go figure), I talked about some of the great teachers who had a profound impact on my life. One of those great teachers, Doug Hodous, and his wife Jan were both in the audience. Doug and Jan have been close friends since I graduated from high school, and you can imagine my thrill in having them at the award ceremony.

To close out my remarks, I invited the new President of Arapahoe Community College, Dr. Diana Doyle, to help me with what has become a signature demo – the Three Egg Drop. The set-up went just as planned, but I soon realized that I had forgotten a key item… the empty toilet paper tubes. My wife, Renée, who was sitting in the front row could see the desperation in my eyes and without a word ran off to see what she could find. Fortunately, I had an extra science demo in my bag of goodies that I could use to afford Renée the time she needed to somehow find empty toilet paper tubes. In under two minutes, Renée returned to the sounds of applause with an empty paper towel tube and a pair of scissors. The raw eggs were perched onto top of the tubes which rested on the tray that was positioned over the tall glasses of water. With one decisive hit, Dr. Doyle smacked the tray out of the way and the eggs fell into the glasses. In all the years of doing this demo, I can say that the eggs falling into glasses this time was the best ever.