It looks like our Insta-Snow® or (Instant Snow as many people call it) is showing up on lots and lots of “Top Gift Ideas” lists that are prevalent on so many blogs. Just add water and the powder instantly erupts into amazing artificial snow that looks and feels like the real thing. Technically, it’s a superabsorbent polymer (if you really want to know), but it looks and feels like the real thing. It’s so realistic that it’s being used in indoor snowboarding parks and by special effects artists in movies. Once you start playing with the stuff, you just can’t put it down.

Here’s how it works… Just mix a cup of water with a scoop of Insta-Snow polymer and within seconds, the liquid turns into a solid and then erupts into a fluffy white, snow-like material (no mixing required). Watch in amazement as it instantly expands up to 100 times its original volume. It’s not sticky like the Insta-Snow imitations. UnIike real snow, Insta-Snow doesn’t melt, which makes it perfect for holiday decorating. It’s even re-usable after it dries out.

How does it work? Insta-Snow® is actually derived from the superabsorbent polymer found in baby diapers. The only difference (and it’s a big one) is that the Insta-Snow polymer not only absorbs water but the long chains of molecules swell to an enormous size. The polymer chains have an elastic quality, but they can stretch only so far and hold just so much water. 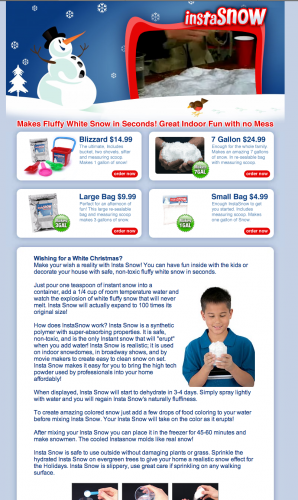 With all of this popularity comes the huge wave of Insta-Snow knock-offs… imitation products where the powder doesn’t exactly erupt like the real Insta-Snow but just turns into a clump of white goo that has to be stirred to eventually look like clumpy slush. It’s amazing to see how blatant some people or companies are when it comes to knocking off a product or an idea. Insta-Snow® Powder is a registered trademark, which means that the name is protected under federal copyright law.

But this didn’t stop a few guys in Minnesota from “borrowing” the name Insta-Snow and developing a line of products that literally copied every Insta-Snow product we had on the market. They copied the graphic design, cleverly named their product Insta-Snow and even went so far as to lift the text from our instructions. But if that wasn’t bad enough, they launched a website called www.instasnow.com and “repurposed” a video of me doing a television segment about Insta-Snow from 9News.com and posted it on the site. If you didn’t know better, you’d think that it was one of our websites.

It’s comforting to know that really good intellectual property attorneys know how to fight this kind of copyright infringement and were able to regain control of the trademark and the domain. If you visit www.InstaSnow.com now, it goes to the right place, but that hasn’t stopped the Minnesota-based company from marketing their own version of snow polymer under the name of Snow in Seconds (after our intellectual property attorneys forced the shut down of their use of the trademark “Insta-Snow.”

It’s also amazing to get phone calls from people who purchased the bad snow and they want to know why it doesn’t work like the snow they saw in the video. Our customer service people have to explain that their Snow in Seconds is actually slush forever. When they eventually receive the real Insta-Snow® from SteveSpanglerScience.com, they understand why it pays to buy the original Insta-Snow.

Surprise School Assembly Teaches Elementary Students How to Make it Snow at Home!