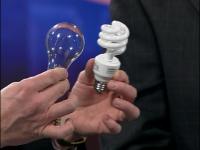 Sometimes the simplest ideas are the most powerful ideas. That’s exactly what I discovered when Ken Luna, an 8th grade science teacher in North Babylon, New York, posted a comment on my blog about his project. Here’s the idea… Mr. Luna wants Oprah to help him give every child in America (PreK-12), just one Compact Fluorescent(CFL) bulb to take home and plug into their favorite lamp. You’ve seen these bulbs at the hardware store… those curly fluorescent bulbs that twist into a normal lamp socket. Bottom line – this action could save at least $2.3 billion in electricity costs.

Okay, Mr. Luna’s Bright Idea got my attention. Visit his blog and read some of the many comments – everyone loves the idea. So I put on my reporter had and decided to find out more. We talked by phone yesterday for about 20 minutes and this guy is the real deal. He’s an 8th grade science teacher who is trying to make a difference. Ken (Mr. Luna) told me that he was at a Dave Mathews concert when he heard the song Stand Up. The lyrics kept running through his head and ultimately inspired this idea. Ken believes that this simple, inexpensive action will help fight global warming by reducing our carbon emissions from electric power plants, save Americans AT LEAST 2.3 BILLION dollars in electricity costs, and help put America on the path to environmental sustainability.

Ken’s idea is spreading like a virus. He told me that the Oprah Show has already received over a thousand emails from people who support this idea. While I agree with the notion of giving every child a CFL, the science teacher in me wants to spend some time and effort educating people about this energy saving idea. Take a look at Michael Bluejay’s website to learn more about energy terms like kilowatt hours and some basic energy calculations.

Don’t wait for Oprah to give kids a Compact Fluorescent Bulb. Make a New Year’s resolution to do it yourself. Pick up a six pack of these lights the next time you’re at the hardware store and make a project out of changing some lights at home with your children. Help Mr. Luna turn his great idea into an unforgettable teaching moment.