You are here: Home1 / Experiments2 / Spinning Tray of Glasses and Hoop 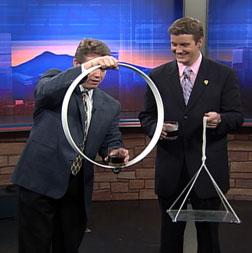 Spinning Tray of Glasses and Hoop

Who can resist the temptation of swinging a pail of water over their head? This science stunt isn’t just for kids as Steve Spangler proves with his swinging tray of glasses… filled with coffee. Steve has a most unusual way to mix his morning coffee. Thanks to a little help from gravity and centripetal force, a cup of coffee never tasted so good. Where’s a stirring stick when you need one?

This demo is a slight modification of the classic swinging pail of water demo. The picture shows the construction of the “spinning platform.” The base is made from a square piece of Plexiglass measuring approximately 12 inches. Drill holes in all four corners large enough to accommodate a piece of rope.  Attach the ropes to each corner of the platform and join them together in a knot about 2 feet above the platform.

Now that all of the difficult work is finished, it’s time to swing the tray and plastic cup (several plastic cups if you’re feeling lucky) around in a complete circle without spilling the liquid or flinging the cup around the room. It’s the tendency for the plastic cup and its contents to go in a straight line that allows it to seemingly defy gravity. The centripetal force provided by the tension in the cords is large enough to create enough friction to hold the plastic cup(s) in place.

Here’s a little advice… practice swinging the tray around without the cups in order to get the feel of a smooth, circular motion. Then add the cup filled half full with water. The liquid adds mass to the cup and helps to keep the cups in place. Some demonstrators even glue a thin piece of rubber to the bottom of the cup to give it a little gripping power (okay, friction) to help the cups stay in place. Shhhh! That’s a little secret between you and me.

Spinning Hoop & Cup Trick – This is yet another variation on the classic “swing the pail over your head trick,” but this version uses a large hoop and a cup of… whatever you want spilled on the floor! Steve Spangler learned this juggling stunt from Mike Caveny, a world-class entertainer who gave Steve this advice: “There’s really no trick to it… just start practicing your spins and hoop twirls until the cup doesn’t fall on the floor. Good luck.” When asked about the origins of the stunt, Mike recalls reading about the trick done by a Russian circus performer at the turn of the century. To see Mike Caveny perform the hoop trick is poetry in motion.

Here’s the heavy-duty science for people who really care…

According to Newton’s First Law of Motion, objects in motion tend to remain in motion unless acted upon by an external force. In this case, Newton’s Law requires the water to continue moving along a tangent to the circle. Thus a force is required to keep it always turning toward the center of the circle. The interpretation of this demonstration is potentially confusing when one considers that at the top of its arc, the water is accelerating downward because of the motion, but that the force of gravity is also downward. One can explain that F = ma is thus satisfied without the water leaving the bucket. This demonstration provides the opportunity to discuss non-inertial (accelerated) frames of reference and inertial (fictitious) forces (such as the centrifugal force).

Okay, the lawyers remind us to inform you that twirling, spinning, or otherwise throwing cups of water around can be harmful to the walls, furniture, flooring and any living being with a 30 foot radius. It’s best to perform this demo outdoors away from all civilization. You should be wearing a helmet and protective body armor as well. Have fun.