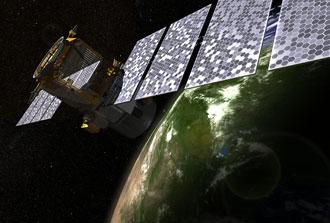 When you think of space experiments, you might be inclined to focus on the International Space Station. But there are a number of cool science experiments happening in space right now (some started over 35 years ago) that are helping scientists answer questions about the Earth’s climate and the evolution of the solar system.

One of the experiments is near and dear to our hearts because the scientists are using our Solar Bag (the same one you float in your backyard) to study Mars.

A Solar Bag is a long plastic bag made from a very thin plastic and colored black to absorb solar energy. The heated air inside the bag provides buoyancy and causes the bag to float. Over the years, it’s become a very popular science demo for teachers to share with their students as they explore the properties of air. You can imagine how surprised we were to learn that scientists from Pioneer Astronautics and Jet Propulsion Laboratory conducted successful tests of its Mars solar balloon inflation system using our Solar Bag. These photos give you a bird’s eye view of what our Solar Bag looks like at about 120,000 feet above the Earth! Keep reading to learn how scientists are conducting tests to develop an actual Mars balloon mission.

Scientists have yearned for many years to make use of Mars’ thin carbon dioxide atmosphere to enable airborne exploration. Balloon carried instruments would return a bird’s eye view of Mars unequalled by either orbital or surface platforms and would reveal through their travels the pattern of the planet’s atmospheric motions as well. However attractive such a mission might be, Mars balloon missions have long been stalled by the challenge of autonomously deploying and inflating a balloon from a descending Mars entry capsule.

To address this question, Pioneer Astronautics has developed an innovative balloon inflation system. Instead of using a conventional inflation gas stored in heavy high-pressure tanks delivered to the balloon using complex plumbing and valving systems, the Pioneer technique employs a vaporizable liquid such as methanol as a float fluid. The methanol is stored within a balloon which is colored black to absorb solar energy and which is stored in a pressurized canister. When the canister is opened under the low-pressure conditions which prevail at low altitudes on Mars or high altitudes on Earth, part of the methanol flashes to vapor, driving the balloon out of canister. Inflation is then completed automatically as solar energy vaporizes the remainder of the methanol.

Thirty-five years ago Neil Armstrong and his crew conquered the moon. Before making the journey back to Earth they left behind a piece of equipment. This piece of equipment is part of the only Apollo science experiment that is still running.

A laser pulse, shot from Earth to the moon, is reflected back by the corner cube reflectors of the retro reflector’s array of mirrors and is captured back on earth. This reflection is usually a single photon and the round-trip time it takes to travel precisely measures the distance between the earth and the moon.

The McDonald Observatory in Texas is the key observation site and has a 0.7m wide telescope that intercepts the reflections from the various reflectors stationed on the moon. The distance between the Earth and the Moon changes for a variety of reasons, but averages about 238,897 miles.

The Advanced Composition Explorer was launched into space on August 25th, 1997, from the Kennedy Space Center in Florida. The ACE is an attempt to understand the evolution of the solar system. Our planet is constantly pelted with a stream of accelerated particles from the sun and the other galactic sources. The analysis of these particles could help us to better understand the evolution of the solar system.

There are six high resolution sensors and three monitoring devices which comprise the advanced composition explorer. They collect samples of the low-energy particles from the sun and the high-energy particles from the galaxy with 10 to 1000 times greater efficiency than any of the previous experiments. The ACE is currently operating in L1 Lagrange point, which lies between the Sun and the Earth at a distance of some 1.5 million km from the earth and 148.5 million km from the sun. This position enables the ACE to have a bird’s eye view of the solar wind, interplanetary magnetic field, and particles accelerated by the sun and the heliosphere.

The advanced composition explorer monitors the space weather throughout the day and forecasts the geomagnetic storms about an hour ahead, thereby buying time to prevent the disruptions to communication on earth, the overloading of the power grids, and also to safeguard astronauts. The spacecraft is still in pretty good condition and has enough fuel to continue its orbit till 2024.

The Cloud-Aerosol Lidar and Infrared Pathfinder Satellite Observation (CALIPSO) and the CloudSat satellites were launched on April 28th, 2008, by NASA from Vandenberg Air Force Base, California, aboard a Boeing Delta II launch vehicle to study the relevance of the clouds and the aerosol particles in regulating our planet’s climate and the quality of air. The CALIPSO was launched as part of the A-Train satellites, Aqua, Aura and Parasol, that together monitor the earth’s climate systems and the changes in them.

The CALIPSO and the CloudSat together collect information on the vertical structure of the clouds and aerosols, which will be used in predicting the human impact on the atmosphere. This will enable the governing bodies to make informed decisions on those policies that might otherwise affect the environment. The information also provides a rough estimate of the role of these clouds and aerosols in atmospheric warming.

The Galileo satellite was designed to study Jupiter’s atmosphere. The satellite was launched into orbit by the Atlantis space shuttle on October 18th, 1989. The spacecraft used a two stage inertial, upper stage booster rocket to thrust the satellite towards Venus and then to Jupiter. On its journey to Jupiter, Galileo made fly-bys of Earth and Venus before gaining enough velocity to be thrust to Jupiter. It was then powered through the radioactive decay of plutonium. This provided a reliable source of power that was unaffected by cold space.

On its course to Jupiter, which incidentally took six years, some of the instruments of Galileo, like its dust detector, the magnetometer, and the various plasma and particle detectors, were used for interplanetary studies. On December 7th, 1997, the atmospheric probe carried by the satellite was released into the Jovian atmosphere to study Jupiter’s atmosphere.

Galileo provided a great deal of information about Jupiter and the moons orbiting the planet. This information will be studied for years to come.

After 14 years in space, Galileo’s mission was brought to a speedy end by sending the orbiter into Jupiter’s atmosphere at nearly 50 kilometers per second.

Animals and Insects in Space

Since as far back as the 1940’s, the US, France, China, Japan, and the Soviet Union have experimented with dozens of various animals and insects in space.

Using Oreo Cookies to Learn About the Phases of the Moon

All of this high-tech science is great, but what about a hands-on science activity here on Earth? Check out this creative way to learn about the phases of the moon using materials you can eat. It’s Oreo® Cookie science!