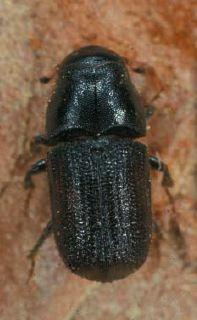 An estimated 750,000 acres of trees have been killed by the pine beetle.

Patches of red pine trees blanket Colorado’s high countryand serve as a warning for an incredible forest fire that will beunlike anything the state of Colorado has ever experienced. Youcan’t blame this one on drought, but instead a tiny little blackbeetle living just under the bark. According to Colorado Stateforestry officials, an estimated 750,000 acres of trees have beenkilled by the Mountain Pine Beetle… and this is just thebeginning.

The Mountain Pine Beetle completes one cycle of development from egg to adult per year. The most common homes the beetles seek are large ponderosa, lodgepole, and limber pines. Adult beetles introduce bluestain fungi, which disables the tree’s defenses and interrupts the flow of water. The combination of fungi and beetle feeding rapidly kills the tree. Ten to twelve months after a successful attack, infested tree foliage turns yellowish to reddish. Soon after, the beetles are ready to exit and search for a new home.

See how the Mountain Pine Beetle is damaging trees in Grand County, Colorado.

Watch how the beetle sneaks underneath the tree bark.

Download more information about the science behind the Mountain Pine Beetle.