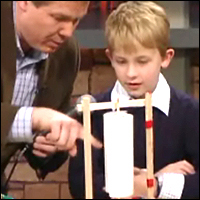 Wind Powered Electricity: Can the Wind be used to Create Electricity?

Colin’s project was Wind Power. He wanted to answer the question, “Can you light up a light bulb using the power of the wind?”  Colin guessed he could make a light bulb illuminate using wind power. He and his dad built a generator using plans they found on the Internet. They wrapped copper wire around a form 200 times for each “coil” that was required for the generator. They then took an old Wet Wipe container, cut it in half, and glued it to a cardboard base with magnets underneath. Colin and his dad then put that on a dowel so it could spin. They attached the copper wire to a small light. Colin says you can create power using the wind and something to collect it. To generate continuous power, the wind has to be constant. The smaller the wind generator, the smaller the amount of electricity generated. Their test worked and Colin says he learned wind can be a great source of energy.