You are here: Home1 / Experiments2 / Flying with a Mirror 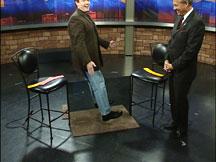 Flying with a Mirror

A very convincing demonstration that makes a person appear to be flying can easily be performed with a large plane mirror. Because of the way that mirrors form images, a number of very interesting optical illusions can be performed. This looks so good you’ll think you’re flying!

The second property that also helps fool our brain is the orientation of the image. Nearly everyone has observed that if a person parts their hair on the right, their image in a mirror has hair parted on the left side. Most people, therefore, say that mirrors switch images from side to side but this is WRONG! When someone holds an arrow vertically upright in front of a mirror, the image is also vertically upright. If the arrow is held horizontally pointing towards one side of the mirror, the image also points to the same side of the mirror. We can therefore conclude that the vertical and horizontal orientations of reflected images are unchanged. But a mirror does change something. When the arrow is pointed directly into the mirror, the image of the arrow points outward in the opposite direction. Or, when we look into a mirror our image looks back at us. Thus, a mirror only changes the direction the object is facing into and out of the mirror.

When we apply the above to our leg and a mirror, we find that the leg and its image are both upright because the mirror has not inverted the image. We also observe that the foot is pointing in the same way because the mirror has not reversed things from side to side. However, since a mirror does change the direction the image faces, the inside of the leg which would normally face away is now reflected back towards an observer. When we look at a person’s legs we see the outside of one leg and the inside of the other. So, when we observe a person’s leg in front of a mirror and the reflection from the inside of the same leg, we naturally assume that the image is actually the person’s other leg. Since the image is in the same position and orientation as a leg on the other side of the mirror, our brain is convinced that it is making a normal observation. When the leg in front of the mirror is lifted, the image is lifted and our brain is fooled into telling us that the person has lifted both of their legs and has actually floated off the ground.

Thanks to Professor Courtney Willis from the University of Northern Colorado for this write-up.