Investigate these mysterious bottles of rice.

Although this effect is presented with modern containers like plastic soda bottles, the original magic trick dates back thousands of years. The magician shows everybody two identical bottles of rice and two chopsticks. When the performer plunges a chopstick into the bottle of rice and lifts, the rice and bottle seem so light that they float upwards as the chopstick is raised. But, when a spectator is invited to do the same thing with the other bottle of rice and chopstick, it refuses to rise. Nothing changes when the performer and spectator exchange chopsticks – the performer’s bottle rises while the spectator’s does not.

Fill two plastic bottles up with rice. Stop when the rice is about an inch from the top.

Put the lid on one of the bottles and shake it to fluff up the rice.  It should appear nearly full.

Now, we want to put some extra rice into the second bottle. To make room for the extra rice, tap the bottom of the bottle on the table.  As you tap, the rice will pack down in the bottle and make room for more.  Add some more rice and continue to tap.  You may even want to use one of the chopsticks to make a few jabs into the rice to pack it down even better. The important thing is to make both bottles look like they are full and have the same amount of rice in them.

Invite a friend to join you and give him/her the bottle with the packed down rice. Ask him/her to push the chopstick down to the bottom of the bottle.  You do the same thing with your bottle of fluffed rice and the chopstick.

Gently lift your chopstick.  It should “stick” to the rice well enough to lift the bottle.  Your friend’s bottle will not rise.

Offer to exchange chopsticks and repeat the demonstration.  Once again, it will work just fine with your bottle of fluffed rice, while your friend’s bottle will remain on the table.

Those are just a few ideas, but you aren’t limited to them! Try coming up with different ideas of variables and give them a try. Remember, you can only change one thing at a time.

Whip Off the Tablecloth Trick 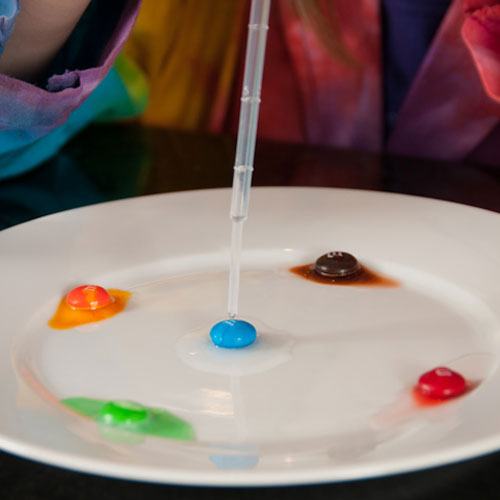