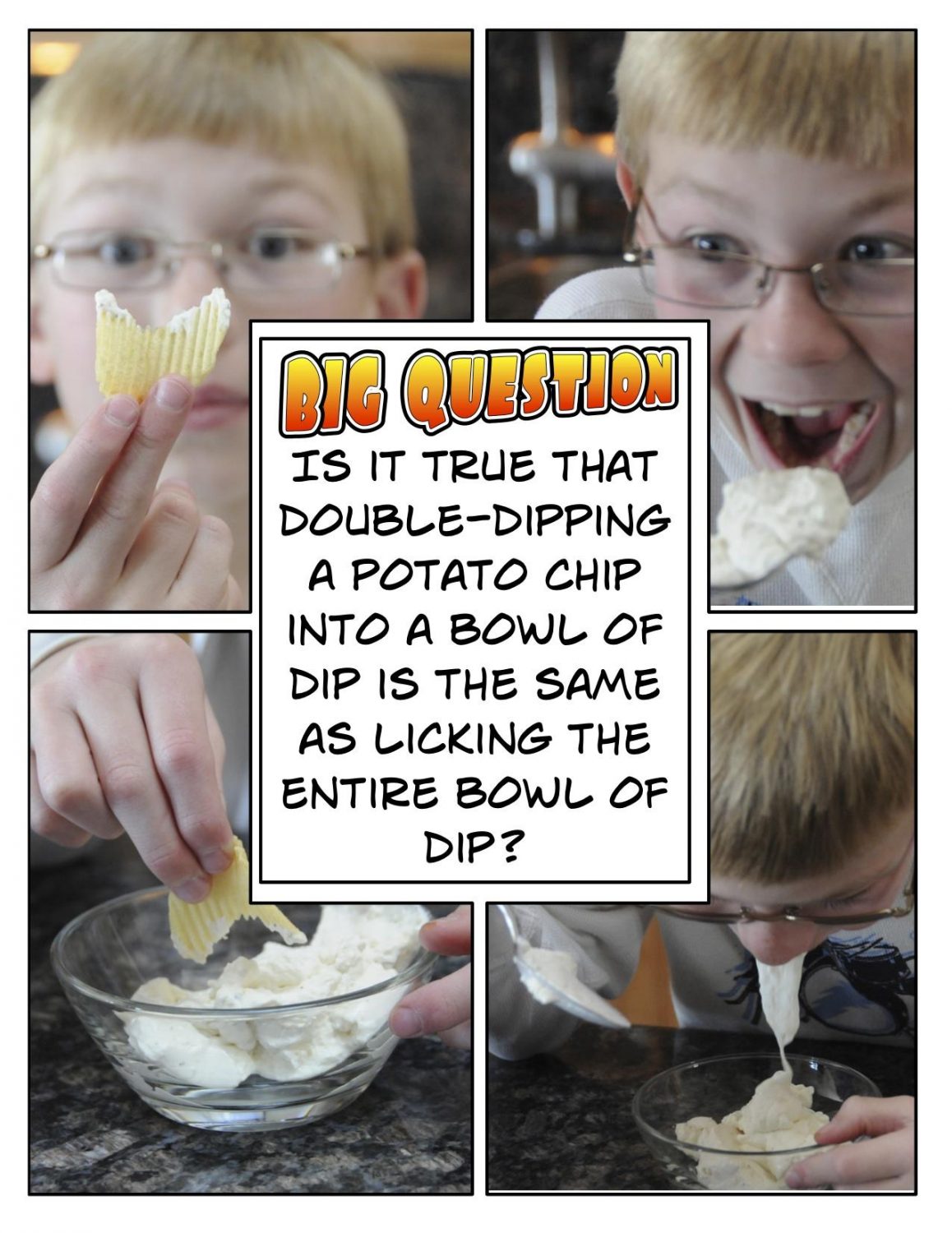 You’ve seen it… someone takes a potato chip, dips it in the chip dip, bites off part of the chip, and then proceeds to dip the chip again. Yes, this is the socially unacceptable act of double-dipping. While some people think it’s no big deal, others believe the act of double-dipping is the same as putting your whole mouth into the bowl of dip. Is this true or just a myth? Leave it to a fifth grader armed with Petri dishes, chips, dip, and an aversion to double-dipping your chip to uncover the truth.

The young experimenter for this project is none other than Jack Spangler. After seeing an episode of Mythbusters, Jack didn’t necessarily see eye-to-eye with the show’s conclusion – double-dipping is no big deal. So, he set out to perform his own version of the Double-Dip Chip Challenge.

The hypothesis was easy to prove – my double-dipped bowl of dip had less bacteria than the “whole mouth” bowl. But I was surprised to see how much bacteria was really in the double-dipped bowl. If you think about it, the chip just touches your mouth for a split second before you plunge back in and get some more dip.

Double-dipping your chip is not a good idea. Some people would say it’s not that big of a deal, but my tests show that the bacteria from my mouth still grew… and it’s gross!

Additional Information: Food science students at Clemson University examined the effects of double-dipping using volunteers, wheat crackers, and several sample dips. They found that three to six double dips in one bowl transferred about 10,000 bacteria from the eaters’ mouths to the remaining dip. That means if you’re at a party and three to six people double-dip their chips, any chip you dip may pick up at least 50 to 100 bacteria. The research was published earlier this year online in the Journal of Food Safety.

What could be better than grossing out your parents, friends, and teachers at the science fair? The Double Dip Chip Challenge clearly follows the requirements of an effective science fair project. It uses a control (the dip with the single dipped chip) and then changes a variable (the double dipped chips), runs some tests under standardized conditions, and then makes comparisons of the results.

If you’d like to try this experiment for your own science fair project, don’t take Jack Spangler’s word for it. Do the same thing and see if you can validate his results. Or, if you want to change it up a bit, consider the following variations:

The Double Dip Chip Challenge follows the scientific method, isolates and controls variables, documents discoveries, and teaches a real world lesson about food safety and the spread of germs. It is sure to be a favorite at the science fair!

Plain Dip – After three days, I noticed that there were some things growing. This could be from the good bacteria in the dip, but I’m not really sure.

Double-Dipped – The double-dipped dish didn’t look as bad as the plain dip until I started to count all of the bacteria colonies. There are at least 28… maybe more.

Licked the Whole Thing – This is just one giant, disgusting dish of Petri pudding. There are so many colonies that they started to fuse together.