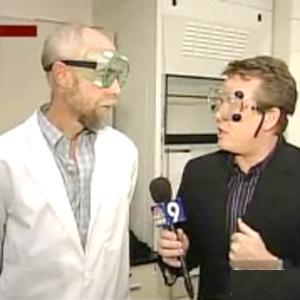 Steve Spangler continues his search for amazing teachers who are certifiably Mad About Science. Steve visited chemistry and physics teacher Don Cameron at Lakewood High School. Mr. Cameron is described by his students as a ‘really great teacher who tells lots of jokes.’ During Steve’s visit, the students demonstrated an experiment with dry ice that shows how global warming makes the oceans more acidic. They also used a Tesla coil to demonstrate what happens inside a car engine with explosive results. Mr. Cameron ended the exhausting visit with a quick nap on a bed of nails.

Mr. Cameron and his students shared three very cool science demonstrations during the television segment. The information below is presented for educational purposes only – these demonstrations should not be attempted by anyone other than a qualified science educator.

The demonstration shows a variety of indicators, all of them are colored when in alkaline or basic solutions.  The solution used is about 0.05 Molar Sodium Hydroxide (0.05M NaOH).  The range of colors comes from mixing different amounts of the indicators, but all are alkaline.  The addition of dry ice, or carbon dioxide, to the solution starts the reaction toward neutralization.  The carbon dioxide reacts with water in the base to form carbonic acid.  This reaction is particularly fast because dry ice is a solid form of carbon dioxide.  However, it also relates to the ocean acidification that is occurring due to increased concentrations of carbon dioxide in the air.  The pH of the ocean greatly affects the food chain and decreased pH (increased acidity) is “clearly” a problem.  This can be related back to the demo – as the solutions clear, we see the potential effect of carbon dioxide and global warming.

This demonstration is dangerous and should not be done by students.  The demonstration makes use of a Tesla Coil. It produces a very high voltage discharge and can break down the molecules in the air and cause the air to conduct.  The other parts of the demonstration involve a plastic bottle, two nails, a rubber stopper, and some methanol.  The nails are pressed through the side of the bottle and sparked to show that the gap still creates a spark.  The methanol is poured in and mixed briefly.  The bottle is stoppered and then lit with the Tesla coil.  This demonstrates the four things needed for an explosion: fuel, air, spark, and a closed container.  Attempts to get it to light again will fail if any one of these four things is missing.  The most common missing element is the air needed for combustion.  This relates very closely to what happens in a car cylinder during the expansion stroke of the piston.  Fuel, air, and a closed container are all present in the car cylinder.  The spark plug supplies the ignition, and the fuel mixture explodes, rapidly pushing the piston up.  This is attached to a camshaft and other mechanical devices to direct this energy into turning the transmission.

Physics teachers love to teach Newton’s First Law with this demonstration.  Roughly, Newton’s First Law states that an object in motion or at rest will stay in motion or at rest unless a net force acts upon the object.  The object of interest in this case is the cinder block, which is placed on top of a bed of nails, which is face down on the instructor, who is also lying on a bed of nails.  The block is at rest, relative to the instructor.  When the sledge hammer is used to break the block, the head of the hammer undergoes a rapid change in momentum (from moving down quickly to moving down slowly).  The block then experiences a force due to this change in momentum.  The block has a lot of inertia.  It is also quite brittle.  So, rather than be pushed into the bed of nails crushing the instructor, the block splits apart, and its momentum is carried away with the pieces that break away.  The bed of nails spreads the force out.  The demonstration still hurts, but not too badly.  The nail beds are constructed of over 1400 nails on 3/4 inch centers.

Don Cameron has been teaching for 6 years now in the Denver area, including the last two at Lakewood High School. Previously he was an engineer for IBM, Lockheed Martin, Storage Tek, and Lucent Technology.  He went back to school to get a teaching certificate because he wanted to be part of educating the next generation of scientists and inspiring them to consider engineering as a career.  Don is the Colorado and Wyoming section representative of the American Association of Physics Teachers (www.aapt.org) and an active member in the Colorado Association of Science Teachers (www.coloradocast.org). He can be contacted at [email protected]