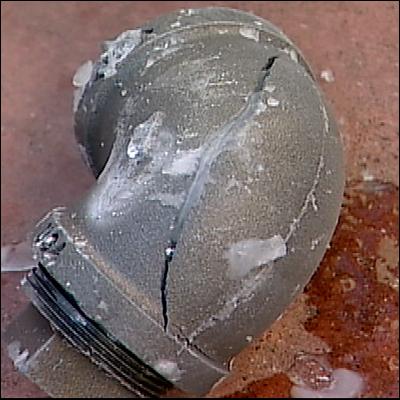 Freezing water can cause problems for homeowners.

Water is a very unique liquid. Unlike almost every other substance in the world, water actually expands when it freezes. This is very cool because it allows people to walk and skate on frozen lakes while fish are swimming below the ice. But freezing water can also pose a few problems for homeowners and create some job opportunities if you’re a plumber. Watch the video to see what this incredible force can do to a water pipe in your home.

If you cannot watch the video, here’s a brief description of the procedure:

Note: Safety glasses and a safety shield must be used when performing this demonstration.

Water is one of Earth’s strangest substances. Why? According to Edward Gordon, professor at the University of Illinois Medical School, water is the only liquid which expands when it freezes. “Generally, all substances shrink as they cool. Water is no exception, for the most part. However, as water cools, it reaches its maximum density (has the smallest distance between molecules) at 34 degrees Fahrenheit. Between 34 degrees F and 32 degrees F, it actually expands slightly. At 32 degrees F, of course, ice (solid water) forms. There is a sharp expansion as the water freezes. You know this is true, that ice is lighter than water, because you can see ice cubes floating in a glass of water. The reason it expands is that the molecules of water rearrange at the time of freezing to form the crystal structure of ice. This arrangement takes up a little more space than it did when it was still liquid, and thus, it is larger per unit of mass (less dense), and so the ice floats on the water.”

Here’s an interesting fact from Jim Stringer – Palo Alto Medical Clinic in California. “One of water’s most remarkable properties is that it expands when it freezes to a volume that is always 10% greater than in the liquid state. In other words, 10 cups of water put into the freezer is going to turn into 11 cups of ice when it freezes. This expansion takes place with tremendous force, as anyone knows who has left a full container of water with a tight lid in the freezer. The force is enough to burst the strongest water pipes if the water in them freezes, which is why people in cold climates sometimes leave a little water trickling through the pipes on freezing nights. It is not possible to make a usable pipe strong enough to withstand this force. Freezing water can burst a cast iron pipe over a foot thick. Water expands when it freezes because the molecules of water are actually closer together in the liquid state than they are in ice.”

Thanks to Flinn Scientific for sharing this demonstration idea for television.