You are here: Home1 / Experiments2 / Bounce No Bounce Balls 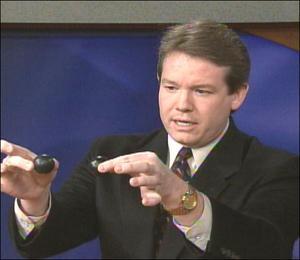 Who would have thought you could teach science at the toy store?

You might be surprised to find balls that don’t bounce, squish, change color, or even splat on the floor. It’s a great way to explore the science of toys.

Bounce No Bounce Balls
The black rubber balls look and feel identical in every way except in the way they bounce. One ball bounces like a super ball while the other ball is “dead.” Since the balls look and feel the same, it’s easy to switch the “no bounce” ball for the one that bounces which results in questions and laughter.

The secret is in the type of material used to make the balls. The ball that bounces is made out of a natural rubber that is highly resilient and very elastic – it’s great for bouncing. The “no bounce” ball is made out of a special type of rubber (usually butyl rubber) that absorbs the kinetic energy of the falling ball instead of changing it into potential energy. This “no bounce” rubber was considered for use in making car bumpers less resilient in a crash. In running shoes, the superior shock-absorbing ability of the “no bounce” rubber helps alleviate problems caused by the tremendous pounding suffered by feet, legs, and ankles.

Racquet Ball Conserves Energy!
This activity requires an adult – one who is smart and can use sharp objects!

With a sharp knife or razor blade (caution!!!), slice a racquet ball into two halves. Trim each half so that it is slightly smaller than a hemisphere. Turn the hemisphere inside-out and drop it, bulge-side-up, on a hard surface. The ball will snap and rebound to a height much greater than that from which it was dropped.

Work is required to turn the hemisphere inside-out and this work is stored as potential energy. As the dropped ball hits the hard surface, this potential energy is released and converted to kinetic energy, allowing the ball to rebound to a greater height.

If you don’t want to ruin a perfectly good racquet ball, try our Poppers. They are colorful fun and give you the same effect!