Common Core – the next big thing in education reform – is getting a lot of positive and negative attention these days. Many of it isn’t accurate, like the requiring Grapes of Wrath for second graders. But what is it and what does it mean for the future of education? Here are a few misconceptions and the truth behind Common Core Standards. 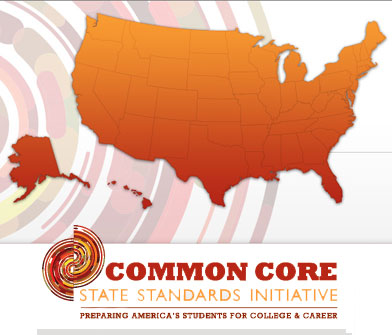 (We asked our Facebook Fans what they thought about Common Core. We are sharing some of their responses throughout this post.) 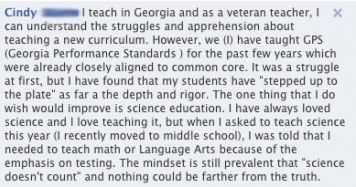 Misconception
Common Core was set by the federal government and is mandated for all schools.

Truth
Common Core is a state-led effort by state leaders, state commissioners of education, state governors, the National Governors Association Center for Best Practices (NGA Center) and the Council of Chief State School Officers (CCSSO). Forty-five states have adopted the standards. Nebraska, Alaska, Texas, Minnesota and Virginia have yet to adopt them. They are being led by the states and are not mandatory.

Truth
Common Core Standards were designed to give every parent, teacher and student a clear idea of what are the standards of success to prepare children for college and the workforce. It is a common understanding of what students are expected to learn in every grade level. That said, Common Core-aligned tests are being developed and planned for the 2014/2015 school year, although some are already taking tests. The high-stakes tests that tie teacher salaries to test scores are the subject of a growing grassroots revolt where teachers are refusing to give them, students refusing to take them and parents keeping their children home on test days. The majority of teachers support Common Core Standards, but take issue with the testing and teaching to the test. This is the most controversial part of Common Core Standards.

Misconception
Politicians are determining what our students are learning.

Misconception
English teachers will have to teach science and social studies in reading material.

Truth
English teachers will still teach both fiction and non-fiction literature. College and real world careers also demand a command of complex texts outside of literature. The Common Core Standards also include reading, research and writing in history and science. The idea is to integrate the subjects, because in the real world, science involves reading, writing, researching and more. Teachers in other subjects like science and social studies are also encouraged to build these important skills.

Misconception
All subjects are under strict guidelines from Common Core to tell teachers exactly what to teach in their classrooms.

Truth
Common Core only covers Math and English Language Arts  and is not a curriculum. Many states and districts are interpreting the standards and molding them to their specific needs. Teachers will still be able to tailor their lesson plans to the needs of the students in their classrooms. The standards provide samples to help guide teachers on appropriate grade-level lessons, but teachers have the flexibility to make their own decisions on what texts or resources they use in the classroom. They do not tell teachers how to teach, they only tell them what students need to learn.

Misconception
Common Core Standards bring down all standards to the lowest common denominator. States with high standards will take a step back and we will fall even further behind international students.

Truth
There is an explicit agreement among the states that no state will lower its standards. Common Core builds upon the most advanced standards to help students achieve success in college and beyond. International benchmarking was important in setting the standards. It is supposed to raise expectations for all students vs. lowering them.

Common Core has its critics…some say we need less standardization instead of more and some do not like the way they are being implemented and adopted. It is by no way a perfect system or the end-all to education reform.

A bigger and very important debate is also being raised – the variation in funding state to state does not level the playing field. For example, Wyoming spends the most per student at $18,068 per year, while Utah spends the least at only $7,217 per student.  This creates huge discrepancies in the resources available to teachers state to state. Districts also spend more or less on education based on socio-economic backgrounds and taxes. Some fear as the standards are raised, the funding will not follow, especially for lower-income schools and their students. But that’s an entirely different debate and post for another time.

Where do you fall in the Common Core debate?

Teachers – what are your experiences with Common Core so far?
Do you agree with it or disagree?
Are they easy to understand and implement?
What do you think of the standards themselves?