As I was digging in my backyard this weekend, planting the last of my flowers and vegetables, I came across several worms. As the dry, bright sunlight hit my squirmy little friends, they wriggled and writhed to immediately get back to their underground world. In all my digging, I accidentally sliced one in half. This made me start to ponder more about worms. We all know they are good for the earth and possess incredible healing powers, but what is the science behind these creatures of the dirt world?

There are over 3,000 known species of earthworms in the world. They are everywhere there is soil.

Experts believe native worm species were wiped out when glaciers covered the earth. Most of today’s earthworms originated from Europe by traveling in the rootstocks of plants.

Worms make soil and are natural soil tillers. They can eat their weight in dirt each day. One acre of soil may contain up to one million worms. Those worms can produce around 700 pounds of castings each day. The castings contain nitrogen and other nutrients essential for plant growth. Worm compost improves soil structure and drainage while increasing nutrients. They also till the soil by mixing layers and producing tunnels. This helps air and water reach plant roots. They are also a food source for many different types of animals and birds. 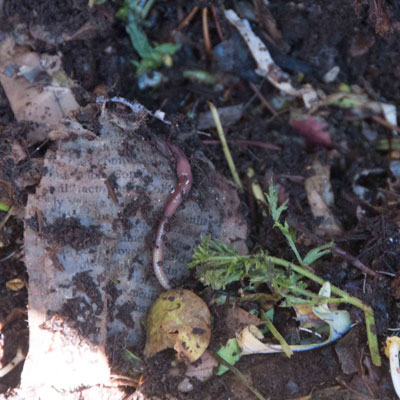 They get nutrition from decaying roots and leaves in the soil. Animal poop and decomposing animal remains are also nutritious food for worms.

The anatomy of a worm does not include eyes or teeth. Worms can sense light, especially at their front end. They will move away from light into the dark depths of the earth to stay moist. They are unable to breathe if their skin dries out. Worms exposed to light for about an hour will become paralyzed and unable to burrow back into the damp darkness.

No teeth means food is softened by moisture and microorganisms inside the worm’s body. Food is broken down further in the worm’s gizzard. Hard particles and muscles grind the food.

Earthworms breathe through their skin, so if they dry out, oxygen can no longer travel into their body.

Setae, tiny feeler-bristles on the bottoms of worms, help them move through the soil. These bristles also help the worms grip the soil when a hungry robin is above trying to yank them out for dinner.

The middle band or collar is the clitellum. It forms an egg and secretes mucus to form a cocoon. Only adults have clitellum. Their head is usually extended as the worm travels and is the end closest to the clitellum.

Worms can travel both forward and backwards.

They reproduce by joining their clitella (the swollen area near the head) and exchanging sperm. Worms are hermaphrodites, having both male and female organs. After mating, each worm will form an egg in its clitellum. After 7 to 10 days, the egg is released into the castings. After 14 to 21 days, one to five baby worms hatch from each egg. They will be mature in about 60 to 90 days.

Worms can live up to four years. When they die, their bodies are recycled by other worms. They survive winters by hibernating below the frost line and hibernating. Eggs can survive a winter inside a cocoon. Worms survive dry seasons by hibernating deep in the soil until wetter conditions return. They enter a reduced metabolic state called estivation, a form of hibernation.

According to worm experts Dr. Dennis Linden and Cindy Hale, worms do not surface during rains to avoid drowning, but instead to move over land. Wet conditions give worms an opportunity to quickly move to new places without drying out. We had an unusually wet few days this spring in Denver. I arrived home to see my driveway covered in worms. Not realizing these were the migrating, thrill-seeker worms, I grabbed a piece of cardboard and scooped all of the worms back into the grass. The sun came out a few minutes later and I considered myself a worm savior. I can only hope I dropped them into a new and exciting plot of grass that opened up some exploration. Worms on pavement  can get disoriented and lose their way back to dirt. When their body dries out, they cannot breathe and die.

I’ve always rejoiced in knowing my sliced worms will regenerate when I accidentally hit them with the shovel. But this is incorrect. They can heal quickly. The head portion of a halved worm may grow a new tail if that segment contains all of the vital organs. The tail end will not regenerate. I will now bow my head and say a little something in memory of my sacrificed worm.

Before digging, you can perform a little worm CSI by looking closely at the soil. Worms will leave small piles or pellets of soil on the surface. If you dig in and find wet, slick tunnels, you may have uncovered a burrow.

Worms are essential to the health of the earth. One way to improve the soil in your garden and promote a healthy earth is to compost. In April, we shared some tips and tricks to composting in your backyard. One worm bin containing 2,000 red worms can produce 7 pounds of castings in a month.

Red worms are the best for compost bins because they are natural surface feeders that do not burrow like nightcrawlers. Red worms also do not mind being confined. They can be purchased from worm farms by the pound.

Commercial and hobby farmers are recognizing the benefits of having a worm farm. Vermicompost encourages plants to grow stronger and helps them become more resistant to disease and insects.

Worms are not the only essential living organisms in a compost bin. Billions of microorganisms live in the worm bin. They get into the bin from the skin of the worm and soil added. Food waste brings in additional microorganisms. Fungal and bacterial spores from the air also descend on the bin. Some people believe garbage in landfills also decomposes like that in a compost bin. Landfills are lacking air and moisture and most importantly, worms. They cannot live in those conditions. Therefore, garbage in landfills takes much longer to decompose.