On Sunday, May 26th, a very special sunset will take place. Three planets – Venus, Jupiter and Mercury will form a triangle in the night sky. They will all be visible to the naked eye or seen together in a binocular field. 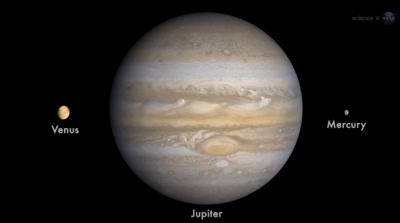 This is a fairly rare celestial event. The last time it happened was in May 2011 and the next time the planets will form a geometric shape will be in October 2015.

The three planets are the brightest in the sky. Venus is #1, followed by Jupiter #2 and Mercury #3. Their triangle will be visible even in urban areas with lots of lights. 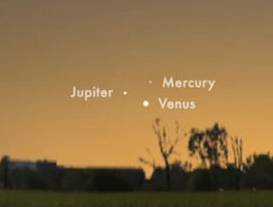 To find the trio, look about 30 to 60 minutes after sunset at the western horizon. Venus will be the brightest and lowest with Mercury to the right and Jupiter to the upper left corner. The planets are visible now through early June, with May 26th being the optimal time to spot the triangle.

On May 23rd, Jupiter and Venus will be close enough to spot together in binoculars. On May 24th, Mercury will pass by Venus with less than 2 degrees of separation. On May 28th, Venus and Jupiter will pass with 1 degree of distance.

Jupiter’s four largest moons can be seen with strong, steady binoculars or a backyard telescope.

Don’t forget to also look for Saturn. It will have a golden hue and be in the south sky to the east of the moon. The star Spica will also be visible near Saturn and the moon. Spica sparkles blue-white and is the brightest star in the Virgo constellation.

Teachers Save 20% – Thanks for All You Do in the Education of Our Chi... The Science Behind Tornadoes
Scroll to top
Create a new list