WARNING: This blog is an April Fool’s Joke

Have you always wanted to build your own lightsaber and fight the forces of evil? Forget the old Jedi Mind Meld trick. That’s for amateurs (and presidents.) You need what all Wookies, Ewoks, Vulcans and Vogons use to protect themselves across the galaxy.

Our amazing researchers at the Steve Spangler Labs have uncovered the secret to how the lightsaber actually works. It’s only a tad complicated – but don’t worry, any padawan can make their own.

You may need to travel to a galaxy far, far away to retrieve some of the components, but trust us. It’s worth it.

Once you have your lightsaber up and running, it’s time to practice a little before going out into the final frontier to look for Darth Vader and his BFF Khan Noonien Singh.

Materials
(If you missed that long list in the video, here it all is)

When combined with a Dilithium Crystal, this hybrid energy is intensified as it passes through the crystal. This exponential amplification converts the weak, long-wave energy into an a form of short-wave energy that is capable of cutting through most objects. 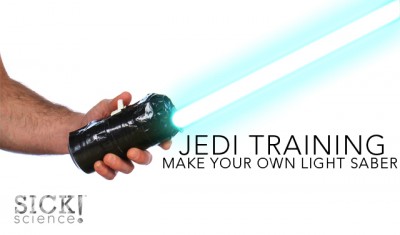 Steve Ignites a Passion for Science at Utah Early Childhood Conference Using an April Fool’s Prank to Teach the Difference Between Possible and...
Scroll to top
Create a new list