This past Monday, we shared our annual April Fools Day science prank video. Many of our customers and fans look forward to our prank each year. This year, we shared step by step instructions on how to build your own lightsaber from the Star Wars movies. The materials list included an empty can, Dilithium Crystal (actually a Ring Pop) and duct tape. We were selling the crystal and an Energy Modulation Circuit (regularly priced $7,597.13 on sale for $11.38). 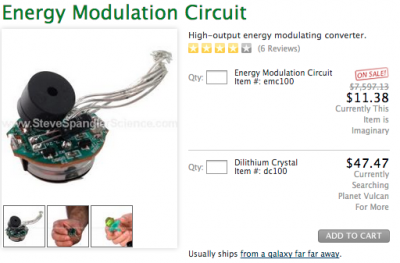 Here’s the video and instructions. There is also a sneak peek at some genuine Jedi training at the end.

We thought it was pretty obvious that this was a hoax and not really an actual experiment that people would go and try. We should have known better. Here’s an email from a mom that we received this week –

I have a six year old who found your light saber project through our school library.  Of course I wanted to encourage his interest in science so we immediately took the list from your video to the store to buy all of the materials…only to find that the power cell is must be something we have to “special order”.  The fact that you had a fake order form for it on the site only led to the false hope that we could actually buy the darn thing there.

$20 of worthless materials later, my kindergartener is going to be crushed to find out this was all a hoax when I tell him we can’t order the power unit.  I’m not sure what the goal was for this “project”, but I’d say this one certainly didn’t accomplish anything.  We’re very disappointed, and will share that feedback with our elementary school.

We appreciate that this mom took the time to send us this email and explain her frustration. This is not being posted to make fun or poke at her in any way. Most of us have fallen for a practical joke or scam at some point in our lives. We are sharing it as a lesson for all children.

The best part of the experience for all of us at Steve Spangler Science (and probably every teacher in the world) is that this child was naturally inquisitive and excited about science. Many teachers use these prank videos to teach kids to think critically and learn a lesson in probability. Just because something is posted on the internet or shared as an experiment, scientists should not take it as fact. Before performing any experiment, take a step back and look at it.

The lack of science education and literacy is apparent in our society every day. This mom and her child are just one example. If they had stopped and analyzed the experiment, they would have realized that a lollipop and a soda can had a very probability of becoming an actual lightsaber.

We hope this parent is proud that she has a son who is naturally curious and has a love of science. We hope she isn’t discouraged that she fell for a prank, but instead uses it as a teaching moment for her child as they attempt another experiment.

This is also not the first time we’ve had members of our YouTube audience get frustrated with our April Fools Day pranks. A few years ago, an experiment involving a paper airplane flying between two opposing fans created a stir.

We had so many people who went out and purchased fans and tried and tried to get the experiment to work, that a few days later we posted this reveal video –

Steve Spangler Science isn’t the only one who has taken a hit in the name of science illiteracy. Two Florida DJs were indefinitely suspended this April Fools when they joked that dihydrogen monoxide was in the water supply. If we as a nation were better educated in the sciences, everyone would have immediately known that dihydrogen monoxide is the chemical name for water. The DJs caused a lot of people to panic when they made the announcement that water was in the water.

For a few more fun and harmless science internet hoaxes for April Fools Day, check out The Spangler Effect

Jedi Training – Use the Force & Build Your Own Lightsaber
3 replies