During the cold winter months, do you ever leave a bottle of water or soda in your car or garage overnight? What happens the next day when the drink is still liquid you twist off the cap and the drink instantly freezes! How does this work and what is the science behind it? 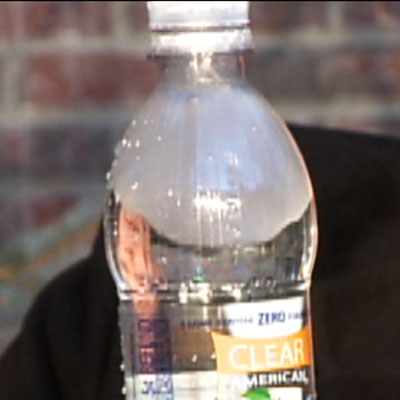 Grab some ice, some salt and some plastic bottles of soda water and try this very cool science demo.

This is a great illustration of how carbon dioxide can lower the freezing point of water.

Again, NEVER use glass bottles for this demonstration as the soda may accidentally freeze, causing the bottle to explode. If you caught the freezing action on video, share it on our Facebook page at facebook.com/stevespangler 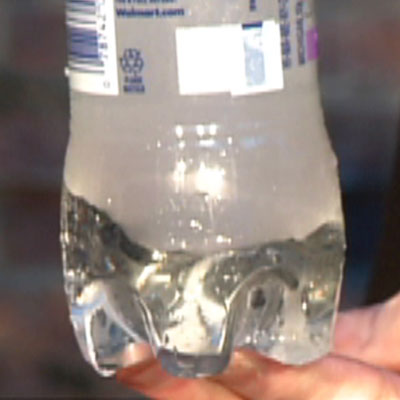 We offer two explanations for this phenomenon – be sure to read the second one!

Explanation #1
When soda is produced, large quantities of additives (like sugar and flavoring) and carbon dioxide bubbles are pumped into water to create bubbly, sugary soda pop. These additives are called solutes and when solutes are added to a liquid such as water, the freezing point of the water decreases. By lowering the freezing point, the soda has to reach a much colder temperature to freeze than water. However, the concentration of carbon dioxide in the soda is only maintained as long as the bottle is kept sealed. As soon as the soda is opened, and you hear that “whoosh” of fizz (carbon dioxide) rushing out of the bottle, the concentration of solutes in the water goes down, and the freezing point goes up. Now, without all that extra carbon dioxide, the soda will freeze much more quickly.

Another Explanation?
Well, that’s the explanation that many science teachers have used over the years. But Joe Franek from the Department of Chemistry at the University of Minnesota, offers another explanation…

“The more likely explanation is that you have a SUPERCOOLED solution that is simply waiting for something to allow it to begin freezing. Opening the bottle allows carbon dioxide bubbles to form and these bubbles provide a place for the nucleation of the ice crystals to begin occurring. You can test this explanation by tapping the chilled bottle without opening it. You should manage to get some bubble formation from the tapping and you should see the freezing occur.”

We think Joe Franek is pretty smart since we’ve noticed that some of the bottles will freeze without opening the caps. Hmmm? Joe Franek hit the nail on the head! Opening the caps and releasing the bubbles is just one way to allow the freezing to begin. Taping or jiggling the bottle will also release a few bubbles – just enough for ice crystals to begin to form.

Thanks to Joe Franek and the Chemistry Department at the University of Minnesota for their help.