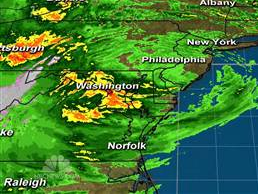 Twenty-seven people have died and President Obama has declared New York a major disaster zone as the Superstorm Sandy continues to move across and devastate the Northeast.

Here’s a quick roundup of the damage and destruction Sandy has caused (from MSNBC): 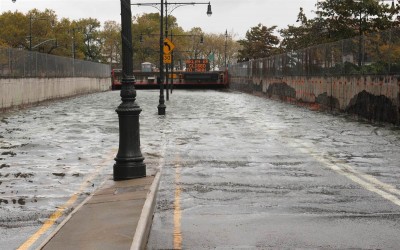 How Does a Hurricane Start?
The following information is excerpted from The Tornado Tube Book.
The hurricane takes its name from the West Indian word huracan which means “big wind.” Storms that occur over the Atlantic or the eastern Pacific Oceans are called hurricanes. The same kind of storm that forms over the western Pacific or Indian Oceans is called a typhoon. This name comes from the Chinese word taifun or “great wind.”

Hurricanes and typhoons are not just violent winds. They are giant, whirling storms that develop in a special way. Hurricanes form only in the tropics where extremely moist air and heat are concentrated over the ocean, near the equator. The water temperature must be at least 80o Fahrenheit both day and night. A wet season with increased rainfall begins in late spring and lasts to early autumn. This is the time of year when hurricanes develop. Evaporation of the warm water into the atmosphere over the ocean makes the air very moist. Winds blowing across the ocean in different directions begin to push masses of warm, moist air toward each other. This event is called convergence. When the air masses collide, the air in the center starts to rise, forming an updraft. At high altitudes, the moist air of the updraft begins to cool and water droplets form. These water droplets form clouds. Large cumulonimbus clouds begin to grow and thunderstorms develop. More thunderstorms form as more convergence and updrafts occur. If the thunderstorms do not dissipate, they may start to gather together. This formation is called a tropical disturbance. Many more thunderstorms join the disturbance. This weather event becomes large enough to be influenced by forces created from the Earth’s rotation. 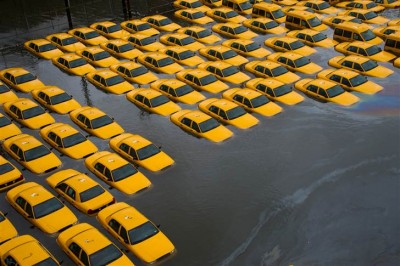 A parking lot full of yellow cabs is flooded as a result of Hurricane Sandy on Tuesday in Hoboken, NJ (Charles Sykes / AP) 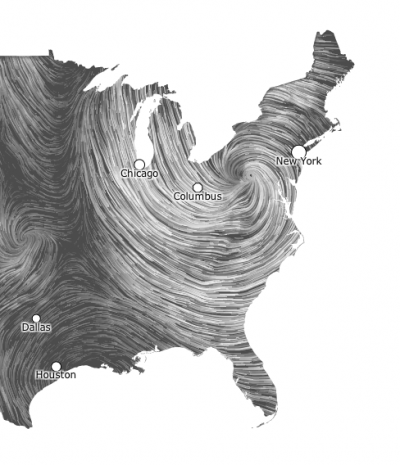 Interactive wind speed and direction map shows the storm over the East Coast.

A hurricane covers a very large area. Sometimes a tropical storm can have a cloud system that is 2,000 miles in diameter. Typically, a hurricane is about 300 miles across. That is about the distance from Chicago, Illinois to Columbus, Ohio. An average hurricane is about 800 to 5,000 times as wide as an average tornado. Hurricanes usually travel across the sea and land at 10 to 32 miles per hour. Some may travel at speeds up to 50 miles per hour. The path of a hurricane usually covers thousands of miles, most of it over the ocean.

It is very important to track these huge storms and to make accurate predications about their movements. Many people live in areas affected by hurricanes. If the National Hurricane Center scientists believe a hurricane is threatening to reach a populated area within 24 hours, they will issue a hurricane warning. People prepare by gathering and sheltering property and boarding up homes and businesses. Sometimes people will even be evacuated from an area if the forecast calls for an extremely strong storm. Many lives have been saved by these preparations. 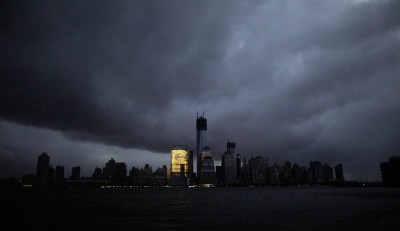 To study conditions inside hurricanes, teams of pilots and weather scientists fly regular missions into these storms. They get measurements of wind speed, temperature, air pressure, and other weather conditions at different altitudes. These investigations help scientists make predictions about hurricane formation and movement. The National Weather Service names hurricanes to quickly identify them. The names are assigned in alphabetical order alternating between female and male names. There are separate lists of names for hurricanes in the Atlantic and Pacific oceans.

You can create your own Hurricane in a Bottle and watch how a vortex is formed. Visit the experiment page for the complete activity.