Members of the Chicago Teachers Union went on strike Monday after talks with the Chicago Public Schools ended without resolution late Sunday night. 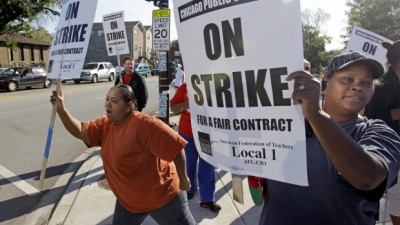 School board President David Vitale said the district changed its proposal 20 times during the talks and did not have much more to offer. The district did offer teachers a 16 percent pay raise over four years and benefit proposals. The union was after a large raise in the contract’s first year, because the district recently increased the school day 30 minutes in high schools and 75 in elementary schools. The union also wants to keep raises for experience.

The two sides are close on the compensation portion, but the sticking points are over the cost of health benefits, the teacher evaluation system and job security. The CTU and the CPS have met more than 100 times for negotiations since last November.

The strike has kept 350,000 Chicago students out of school since Monday. CPS put a contingency plan in effect that opened 144 schools to students from 8:30 a.m. to 12:30 p.m. This still leaves parents struggling to find child care options. Chicago’s 118 charter schools remain open during the strike.

“The assault on public education started here. It needs to end here,” Chicago Teachers Union President Karen Lewis said during a rally at Daley Plaza outside City Hall. Teachers marched from the plaza toward Chicago Public Schools headquarters. They wore red t-shirts with messages that said “I’d rather be teaching.”

“I’m not afraid to say that we care about our children and we have more in common with our children and our parents than we do with these rich people that think they know best,” Lewis added.

The union and its 25,000 members want job security for teachers who face layoffs in closing schools. The district has closed many schools in recent years and there are rumors that an additional 100 schools may close in upcoming years. The CTU wants the teachers that are laid off because of school closings, consolidations and turnarounds to be recalled for new jobs and openings. The district recently rehired almost 500 teachers in exchange for the union to agree to a longer school day.

The CPS only temporarily allowed this and will not agree to a permanent deal.

“Teachers in this city agreed to a longer day … and what our union got in return for that was a promise there would be a recall procedure for those teachers who are going to be hired,” said Jesse Sharkey, vice president of CTU. “Now we see that offer is being taken away from the table, and there is no sign of respect there. That’s important for our members.”

Chicago Mayor Rahm Emanuel says he doesn’t want to place the district’s hiring control in the hands of the union.

In CPS’s latest proposal, teachers who lose their jobs from closing schools will be eligible for openings at the school that takes in the students from the closed building. If the school isn’t hiring, teachers would be offered three options – a three-month lump-sum severance, five months in a “reassigned teacher pool” or a spot in a “quality teacher force pool,” which would give the teachers an interview and explanation if not hired.

The teachers’ union also wants to lower how much student performance contributes to evaluations. The CPS says the new evaluation system was created in collaboration with teachers and settled in March under state law.

The evaluations judge teachers on how their students perform and focus on academic gains. Teachers say this isn’t fair and is not unlike judging a junior baseball coach who has no control over which players get on their team.

“This is hard work coming out here day after day,” said Jataun Williams, a veteran special education teacher at a South Side elementary school. “You worry about your kids and what they’re doing while you’re away.”

The teachers also say this is a lesson for their students to stand up for what you believe in. Some parents took their children to the rally to show democracy in action.

What are your thoughts? Do you support the Teacher’s Union or Public Schools administrators and mayor?

Facts and quotes taken from Chicago Tribune. For the latest updates in this story, follow their complete coverage on their website.

Pinterest for Teachers – How to Get Set Up How Teachers and Educators Can Use Pinterest as a Resource In and Out of the...
Scroll to top
Create a new list