Our annual Weather and Science Day reached a new height this year with the launch of a weather balloon during the event. The weather balloon was launched with help from The Edge of Space. During it’s flight, it reached the edge of space at a height of 93,000 feet. That’s higher than Mount Everest and higher than what a military jet can fly (50,000 feet). The balloon drifted northeast and landed hours later near Synder, Colorado. 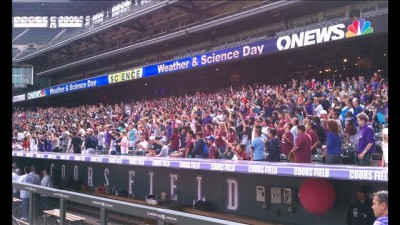 Beaker “piloted” the weather balloon along with three flags from 9News, the Colorado Rockies and Steve Spangler Science. The balloon also had three cameras onboard that recorded hours of flight footage. You can see Beaker at the edge of the heavens and his violent fall back to earth after the balloon ruptured. 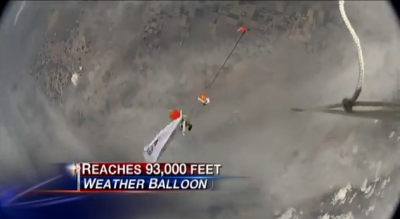 The underlying lesson was to work with The Edge of Space people who love flying balloons as hobbyists. Their dedication and passion to ballooning was inspiring.

Launching a balloon from Coors Field in the middle of the day isn’t as easy as it sounds. The balloon was going to take a journey up through aircraft flight patterns and could potentially be very hazardous. The FAA granted us special permission and diverted air traffic for 10 minutes for the launch.

This was the biggest Weather and Science Day, and although we do not have official numbers yet, we definitely had the biggest crowd ever.

The weather balloon was the biggest piece of Weather and Science Day, but it wasn’t all we did.

Students, teachers and weather and science fans also learned about the science of air, solar energy and the freezing and expanding powers of liquid nitrogen during the one hour event. 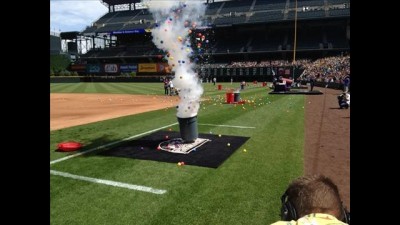 Watch The Spangler Effect for an upcoming special half-hour episode dedicated to the weather balloon launch, flight and science behind it.

Bullying Is Not a Game

Television’s “Who Wants to be a Millionaire” Called Today…