Houston, we have lift-off! The fourth graders at Wilder Elementary in Littleton, Colorado, invited me to participate in their annual paper rocket launch. This 4th grade unit is inspired by the original rocket boy, Homer Hickam. Instead of using pieces of lead pipe and gun powder, these kid-friendly rockets are made from construction paper, tape and clay… that’s it. No engines or explosives in these rockets – the only fuel was 70 pounds of air pressure.

I first learned how to make the PVC Rocket Launcher several years ago while speaking to teachers at Space Camp for Educators in Huntsville, Alabama. The morning started with each student making their first launch. Some of the rocket designs were great while others just blew up on the launch pad. It was back to the drawing board as the students reanalyzed their designs, fixed the flaws and headed out for the second launch. The success rate for the second launch was well above 80%… and the young rocket engineers were amazed to see their success.

The greatest learning moment of the entire morning was the numerous failures the students experienced on their first attempt.

The students expected success… and when they failed it forced them to re-tool and try again. This hands-on rocket activity is an extension of the normal space unit that is standard at this grade level across the school district. However, the teachers at Wilder take the unit to a new level (pun intended) as they Homer Hickam’s October Sky story and his passion for exploration and discovery as a catalyst for their own students to get engaged in the scientific method. This single lesson does more to drive home the importance of trial and error than anything I’ve seen in years. Best of all, the students write about their successes and failures and reflect on the feelings that they must have shared with the author.

If launching rockets wasn’t fun enough, just wait until the real rocket scientists show up from United Launch Alliance here in Colorado. It also doesn’t hurt to have parents of students who work at ULA and support this style of hands-on learning. Ellen Plese from ULA stopped by to not only show her support but to bring goodies for all of our finalists. 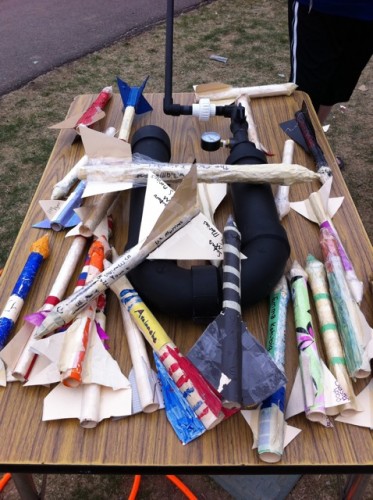 Are We Overbooking Our Children & Ourselves in a "Race to Nowhere?... Steve Spangler Spotlight on Zarah with a Z
Scroll to top
Create a new list