My boys make guest appearances on TV with me occasionally, but this week I brought my 3-year-old nephew Cody to help demonstrate how people conduct electricity. If you’ve ever watched kids going down the slide at the park, you’ve seen static electricity at work. When the kids reach the bottom of the slide, their hair is standing on end. As the child slides down, the electrons gather around their head and cause their hair to rise. 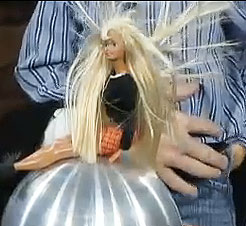 Cody is a character and was ready for his television debut. We practiced a little before heading out to the station. Cody didn’t want to take my cues, especially when I said, “Hey Cody, who’s our special guest today?” He just smirked and told me he wasn’t going to “say the word.” I tried, his dad and mom both tried, but nothing. I felt like I was playing Password but failing miserably.

“Cody, the password is Barbie. Barbie is our special guest.”

Still nothing. I promised to take him to Vending Land…mystical place in the TV station’s breakroom full of snacks, sugar and chocolate bars if he said “Barbie.”

Barbie was an important special guest, because she helped demonstrate the electrons in static electricity that gather and cause hair to stand on end.

We made our appearance with Mark Koebrich, Cody hit his marks and said his lines along with a lot of other useful information. We also snuck in a little lesson on electricity. He proved he’s a star and did an amazing job.

Freeze Frame on Water Jelly Cubes How Much Sugar is in a Can of Soda?
Scroll to top
Create a new list