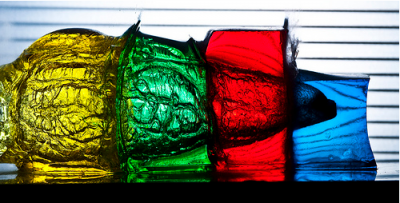 We love to hear from our customers to see how they are using our products in their classrooms and in their homes. Recently, we met a very interesting customer that doesn’t purchase our products for the usual educational purposes. He shoots pellets through them. Alan Sailer is an up and coming photographer with a unique angle.

Using a homemade flash, Alan takes high-speed photography of objects being blasted by pellets at his home in southern California.

He ordered our Water Jelly Cubes to photograph. The results are colorful and stunning.

Alan shares his photography on his Flickr account. Some have gone viral and have even caught the attention of Good Morning America and National Geographic. Several overseas publications have also displayed Alan’s work.

Alan says his flash is the key to his photography. He built it in 2008 and has been taking high-speed photos ever since. The flash is very fast – about one microsecond. 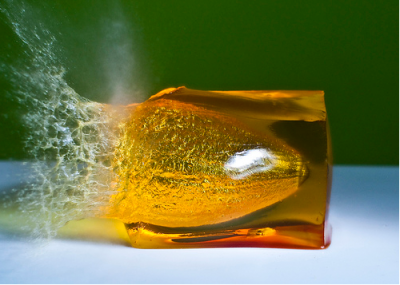 The photographs are taken in a darkened room with the shutter speed set to one second. After getting the target ready and checking exposure and composition, Alan clicks the camera with his right hand while firing the rifle with his left. The pellet passes through a laser trigger, which sets off the flash. The flash fires and freezes the moment of impact. When the second is up, the shutter closes.

Not every fire of the rifle and click of the camera is successful. It usually takes a few tries to get things picture-perfect.

Alan says it is fun to take the pictures, but also very stressful. The flash uses 20,000 volts –dangerous when there’s liquid flying everywhere. Alan also says he doesn’t really like shooting stuff because it’s so noisy, but he enjoys the results.

Build a Trap, Catch a Leprechaun for St. Patrick’s Day 50,000 volts of Electricity and a 3-Year-Old
Scroll to top
Create a new list