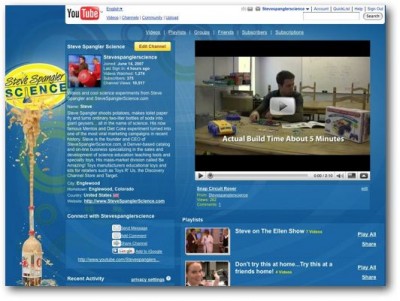 It’s not unusual for our office to get a call or two a week from the media about the Mentos Geyser experiment. Most of the inquires focus on how the reaction works or questions about MENTOS myths. When Tom Whipple from the London Times called, his interest in the MENTOS Geyser focused on the vehicle used to popularize the experiment – YouTube. Here’s the interview from the London Times…

Steve Spangler was not the first to perform the “Mentos experiment”. It was just that when he did — in his role as a science correspondent on NBC — there was what he refers to as “a perfect storm” of circumstances.

On live TV he put a Mentos mint into a bottle of Diet Coke, waited for a geyser to erupt from the top and watched as the news anchor got soaked. “They tried to fix her hair,” he says, “but it didn’t work.” Crucially, there was also “this little thing called YouTube, that no one knew about”.

The news clip went viral and the original experiment was repeated by thousands of people, many of whom recorded their own innovative variations, from fountain displays to bottle rockets. It was, Spangler says without hubris, the biggest collaboration on a science experiment as well as being excellent home-science fun. “Its popularity now is indicative of telling kids for 20 years: ‘Don’t try this at home’,” he says. But he cautions: “It gets very messy.”

Spangler likes messy experiments. One of his favourites is footage of when he filled a swimming pool with cornstarch and water — producing a non-Newtonian fluid, a little like custard — then got people to walk across. As with custard, the liquid becomes a solid when enough force is applied.

Not all of the scientific clips on YouTube are so exciting. One experiment, shakily shot, is of a candle floating in a dish of water. The candle is slowly covered by a jar, it goes out and then gently — mesmerically — the water rises up the jar. A classic GCSE experiment, it has been watched 320,000 times. Hundreds have commented on it — many wanting to know how it works. And here is the problem of online experiments. The intellectual curiosity is there, but there is no authority to explain what is happening.

Spangler is aware that, while the Mentos eruption may entice people into science, most of those watching are not aware of the science behind it. For the record, at a microscopic level, each Mentos mint is pitted and when dropped into a carbonated drink — containing dissolved CO2 — those pits become nucleation points, causing CO2 to emerge rapidly from solution. “My only regret is I allowed this to turn into a spectacle before I explained it as a science experiment,” he says.

YouTube also includes material to satisfy PhD students. An extraordinary interview with Richard Feynman — the Nobel prize-winning particle physicist — has been posted piecemeal online. For an hour Feynman, who was known by his students as “The Great Explainer”, sits on a chintz sofa and answers questions about science. Despite no publicity, and extremely basic production values, it has been watched tens of thousands of times.

For Spangler, though, it is only just beginning. “We’ve shown that you don’t need a laboratory or PhD to get people excited,” he says. “One of the things I’m struggling with now is trying to get teachers to embrace YouTube as a tool, rather than something they fear.”

Spangler has more than 200 science related video on his YouTube channel – www.youtube.com/stevespanglerscience

The public’s appetite for science far exceeds most TV companies’ appetite for broadcasting it. For instance, a video showing fluid dynamics has been watched 500,000 times. Three dyes are mixed in a clear liquid. Can they be unmixed tinyurl.com/fluid-mechanics

Jill Bolte Taylor’s lecture about strokes has had a million hits. She is a neuroscientist, but the lecture describes her own stroke — as it happened. tinyurl.com/stroke-lecture

The LHC rap, created to explain Geneva’s Large Hadron Collider, works because the physicist performers are aware of how absurd it is. Viewed five million times, the professors have complained that students now use its lyrics in answers to questions tinyurl.com/LHC-rappers

The most impressive variation of the Mentos and Diet Coke experiment is a hundred bottle-long domino rally by two lab-coat wearing “scientists”. Viewed a million times. tinyurl.com/Mento-extreme