Kim Christiansen thought that Monday would be just another fun, hands-on science segment with Steve Spangler. Little did she know that the bottles of soda would explode and she would be wearing the experiment. This is not the first time I’ve done the Mentos Soda Explosion on the air, but I can safely say that I’ve never gotten these great results either.

Learn how to do the Mentos Soda Explosion – read the experiment 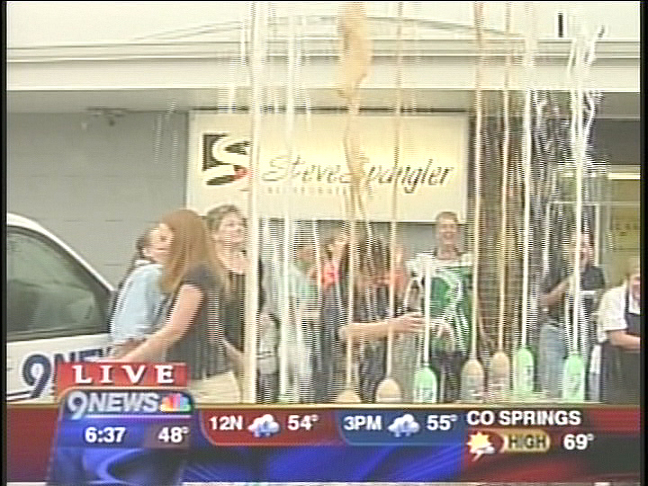 Okay, so what happens behind the scenes? Did I practice this with Kim? No… never… absolutely not! Now, this is not to say that I don’t practice the demo ahead of time – there’s lots of prep that goes into each segment. But I don’t let my cohort in crime know in advance EXACTLY what is going to happen… because I want the viewer to see that person experience the demo for the first time. It’s tough to fake genuine excitement or the element of surprise, and as you can see from the video segment, Kim was surprised. As they say in the business, that makes “good TV”. How high did the soda erupt? Judging from the slow motion that we replayed in master control, it looks like the soda shot up to about 16 feet. That’s the power of carbon dioxide in a 2-liter bottle of Diet Coke. And yes, Diet Coke remains to be the best performer (and I’ve tried almost everything). One final note… the Diet Coke was room temperature, I used 13 Mentos candies that dropped from a big plastic test tube.

Again, this is just one of the 50 experiments in the Fizz Factor book.

When the tie dyed lab coat comes out, it’s time for science Make $1000 writing a lesson plan… JUST DO IT!
Scroll to top
Create a new list