There’s only one problem with these “best of” video lists… someone has to actually sort through all of the videos and come up with a list! Props to our genius video editor, Bradley Mayhew, for all of his editing magic in 2008. When the year starts out with 4,500 pounds of cornstarch and water and a cement truck on The Ellen Degeneres Show… you know it’s going to be quite a year! Our video and experiment library has grown to almost 400, with 70 new science videos added to our science video library just this year. Selecting our Top 10 Videos for the year was tough, but here are our personal favorites. Let us know what you think… 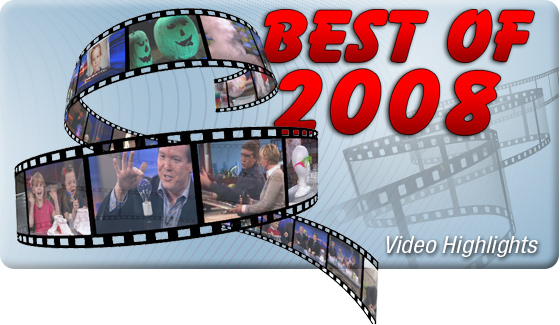 Spangler Science Video Compilation – Here’s a quick look at some of our television highlights from 2008.

Fun Fly Stick – Who said static electricity was boring when you can make objects fly?

Liquid Nitrogen Explosion – What do you get when you mix a tub of liquid nitrogen with some really hot water?

Science on the Ellen Show – April 2008 – Featured experiments included dancing fire in the Whoosh Bottle, the Vanishing Water, and fun with Potato Guns.

Spangler Family Science – Reporter Kim Christiansen introduces you to Bruce and Kitty Spangler and shares the story of one family’s desire to make learning fun.

Mentos Diet Coke Explosion – The “boy in a plastic box” give thousands of teachers an close-up view of the famous Mentos Geyser Tube experiment.

Fire Dragon – Teaching the science of special effects fire using lycopodium to create a giant fire ball – how it works!

The Liquid Nitrogen Explosion – Behind the scenes video showing Steve Spangler and his demo team preparing for an upcoming segment on the Ellen DeGeneres Show.

Steve Makes His 12th Appearance on the Ellen DeGeneres Show
Back from Ellen – Covered in Cornstarch!
Non-Newtonian Glop – Making Cornstarch Monsters
Science Birthday Wish for Ellen DeGeneres
Top 25 Holiday Gift Ideas – Educational Toys with a High Wow Factor
Evolution of Dance Guy Mysteriously Vanishes in an Explosion
The Spangler Demo Team Does the Reverse #ALSIceBucketChallenge
Having a Blast at the NAEYC 2008 Conference
3 replies

Growing Bacteria Experiment Helps BJ and Howie from Alice 105.9 Search for "Things"... So… You're Going to Alaska
Scroll to top
Create a new list