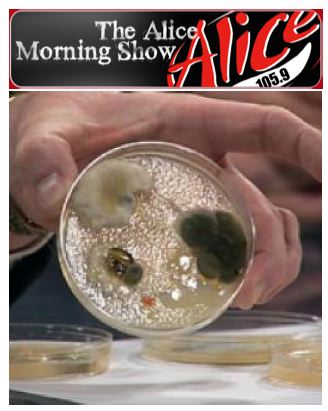 The growing bacteria from the 9News experiment

BJ and Howie are familiar voices to morning listeners of Alice 105.9. Whenever their conversation veers off on a science tangent, I know that my phone might ring. Several months ago, Howie was so certain that the studio was infected with mold spores that he paid to have his workplace tested. Any guesses? That’s right… no mold of any significance. Today’s issue is one of bacteria and germs.

Listen to the Interview on Alice 105.9

Early last week, Mikey the morning show producer called our office and order a Growing Bacteria Kit. Like good little science soldiers, they cooked up the nutrient agar and prepared the Petri dishes. The next day, Howie followed the growing bacteria instructions and swabbed areas of the studio where he thought the germs and bacteria were running wild. After letting the “stuff” grow for a few days, BJ and Howie invited me down to the studios for a quick look at their science project.

Here’s the important point… unless you have the samples professional tested by a qualified biologist in a lab, there’s really no way of knowing exactly what is growing on those dishes. I’ve been told by microbiologists at the University of Colorado at Boulder that while the “hairy” stuff looks bad, it’s probably nothing more than common mold. On the other hands, those  brightly colored dots (red, orange and yellow) are probably something much more serious… but that’s as much as anyone will say until a “real” test is performed. 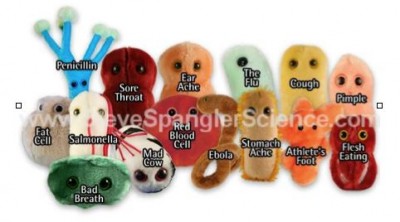 So, to console BJ and Howie, I took them some cuddly Giant Microbes (Flesh Eating Disease, Mad Cow, Salmonella) and also invited them to touch 50,000 volts of electricity in hopes of killing off any lingering bacteria.

Listen to the interview…
[display_podcast]