Humans Saved Penguins By Trying to Kill Other Humans

The answer is yes. You love penguins just like everyone else.

You’ve watched Happy Feet more times than your 11-year-old niece has sang “Let It Go” in the last 5 months. (Don’t worry, we won’t talk about how much you cried during March of the Penguins.)

Well, what would you and your penguin-loving friends say if I told you that humans placed close to 20,000 land mines  on the beaches of the Falkland Islands? Perhaps I should tell you that millions of penguins call the islands home.

Now that I’ve got your attention, let me tell you how that really isn’t as bad as it sounds. In fact, these gruesome seeds of war may have actually saved the penguins from, you guessed it, humans. The Falklands’ reputation for penguin-based conflict began with whale oil.

As everyone who has completed their whale oil handbook knows, rendering whale oil requires big vats and boiling water. This posed a problem to the European whalers in the area, as the Falklands don’t possess much in the way of trees for burning. They turned to something way, way out of left field: penguins. Penguins proved to be easily caught, and even better for fire because of their own fat layers. 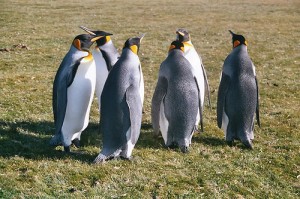 WE ARE NOT WOOD!

Now, in the year 2014, we don’t have much use for whale oiling. We find our relentless desire for power from other places like fossil fuels, the sun, and water.

War in the Falklands

With the fossil fuel discovery, so came a reprieve from penguins being used as tuxedoed pieces of firewood. The population began to grow in numbers, again, until Argentina’s government attempted to regain control over the islands from the hands of the British.

Those two combatants are less likely than a Mike Tyson – Evander Holyfield rematch, but combine political instability in Argentina with an aggressive no-dictator policy from one Margaret Thatcher, and you’ve got a 2 month conflict over the Falkland Islands.

When the tide went out the British remained victorious, but had a large military invoice show for a fairly lackluster piece of real estate.

To make the conflict worthwhile, the Falklands became an exclusive fishing zone. Our tux-wearing bird friends also eat fish. You can see where this is going.

Competition from human counterparts dropped the penguin population from 6 million to 1 million in just 10 years. So, humans contributed to this penguin downfall, but they’ve also saved the penguins.

Remember those land mines we told you about?

The Argentinians left them all over the coast of the islands as British deterrent (we’ve found George Washington does a great job, too).

Thankfully, no humans have actually died from the estimated 20,000 left. Instead, these land mines protect the islands’ penguin inhabitants. The penguins are too light to set off the incredibly dangerous explosives, while humans and the 700,000+ sheep on the island will go… um… kaboom!

So, humans, what do we have to say for ourselves? Our best animal protection efforts happen out of trying to blow the legs off of each other. Thankfully, both Argentina and Great Britain are tentative about going back for the estimated 11 billion (that’s billion with a gigantic “B”) gallons of oil there. Maybe nukes will give the penguins an even better habitat, but don’t count on it.