Does this look like a Big Bear (Ursa Major) to you?

You don’t need a big, strong telescope to see wonders in the night sky.   All the ancients had was their eyes, and since the air was unpolluted and without the interference of electric lights, they could see quite a lot up there.  I’ve often thought that the ancients must have been able to see a lot more stars in the constellations, because none of them looks much like its name these days.  These ancients, with only their eyes, charted and mapped the sky, and did it so well that we are still able to use these same charts and maps. We also still use the names the ancients gave to what they saw in the sky.

Add to your eyes a pair of binoculars, and your night sky wonders will increase more than you could ever imagine.  Those first telescopes, remember, weren’t nearly as powerful as those pink Happy Meal binoculars on the floor of your van.  If you have powerful big-boy/girl binoculars, all the better.

Without a telescope – with just binoculars – you’ll be able to see several of Jupiter’s moons, and Saturn’s rings (if it’s turned the right way) and Venus & Mars as discs, not just dots.

I used to be a little girl who sneaked outside late at night to lie on top of the car and scan the sky with those very same pink plastic binoculars.

Thank you, Santa, for granting my only wish that Christmas.  I still have the telescope; it’s leaning in the corner in the living room.  Thank the elves for me, too; they did a great job. 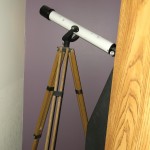 So yes, I have known what it feels like to have a genuine wish come true.  While other little girls crossed their fingers and shut their eyes and hoped for Barbie under the tree that year, all I wanted was a telescope.  And I got it.  I can still remember the sensation of realizing my wish had been granted.

And with it, I could watch the universe, unfolding, closer and clearer than ever.  It’s not all science, you know.  It’s everything.  Science just helps us make sense of it.

Show Your Teacher Appreciation and Enter to Win a Wish List or Gift Certifi... 3D Printing: The End of Manual Labor?
Scroll to top
Create a new list