The Colorado Front Range is still reeling after a major storm dumped more precipitation on areas in 24 to 48 hours than they receive in an entire year. The result was 20-foot walls of water rushing down the sides of mountains, rivers coming over their banks, roads and bridges washed away and houses flooded. Hundreds of roads and bridges washed away across the Front Range. Some places, like the town of Lyons, became islands completely surrounded by water. 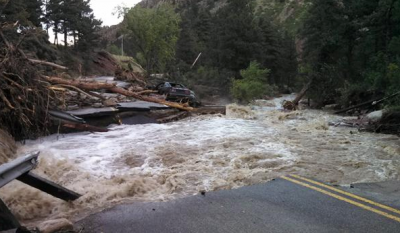 The flooding has effected 17 Colorado counties with the most devastating in Boulder and Larimer counties. Parts of Jefferson County around Golden and Evergreen and Arapahoe County in Aurora are also affected. 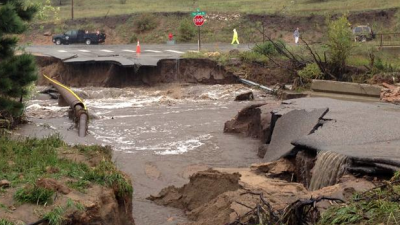 National Guard officials say the rescuers are waiting out the flood Monday until they can leave by helicopter or use their high tactical vehicles to cross a river that is still raging in Lyons, northwest of Boulder.
Courtesy 9News, Denver

Some roads and schools are still closed this week after the flooding devastated the state. Here are a few 2013 flood stats as of Sunday, Sept. 15. 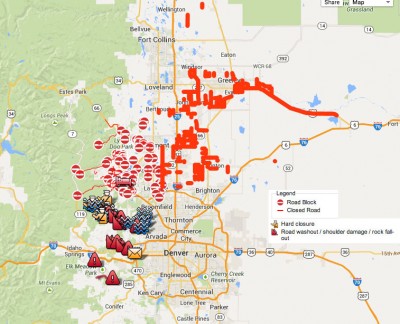 Crisis map of Colorado as of 9/15/13. Click map for current and larger version via Google.

The storm that caused the flooding was a slow-moving system that pulled in a large mass of warm, moist air from the Gulf of Mexico and pushed it to the west. When the air hit the Rocky Mountains, it was pushed up and fell as rain while the air mass stalled over the Front Range for several days. The Front Range is not environmentally prepared for tropical rain. The ground is hard and water runs over it instead of being absorbed.

“We’re dealing with a tropical air mass in a mountainous environment, and that’s just a disaster,” Jeff Weber, a scientist at the University Corporation for Atmospheric Research (UCAR) told Live Science. “As the air is pushed up by the mountains, it squeezes out all the rain.”

Weber lives in Boulder and had his basement flooded.

While not all areas in northern Colorado or even Boulder experienced a 100-year flood, many did or worse. The flooding was the worst since the late 1930s. 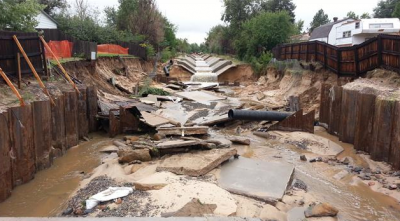 This storm has been referred to as a “100-year storm.” But what does that mean?

It does not mean a flood or storm may occur every 100 years, like many interpret it, so the USGS is trying to get away from using the term.

In two days, the National Weather Service in Boulder had measured 12.3 (31cm) inches of rain. The previous record was 5.5 inches (14cm) in an entire month. In the past week, Boulder has received over 21 inches of rain. That much rain in that short of a time period had less than a 1 percent chance of happening, according to Nolan Doesken, a Colorado state climatologist.

In some places, flooding was so severe, gauges set in place to measure river depth were washed away. One gauge was swept away when the river bank collapsed. Researchers may take some time in compiling all of the data and facts due to the scattered instruments.

Here’s some dramatic before and after photos of the flood areas from our friends at 9News.com.