One of our favorite kid scientists, Doctor Mad Science, was featured last week in the New York Daily News. His science videos share DIY science experiments and activities to an audience of kids and their parents.

We were introduced to 11-year-old Jordan Hilkowitz a few years ago. He is an amazing online video star who shares his versions of kid-friendly science experiments inspired by the big guys. 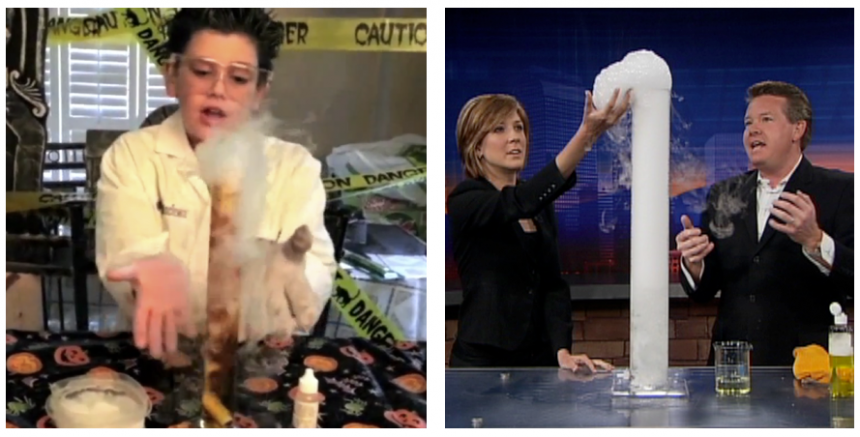 He has performed science experiments from Steve Spangler, Paul Doherty from San Francisco’s Exploratorium, Science Bob and the Whiz Kid.

Jordan is autistic and until about six years ago, barely spoke at all. He enjoyed trying science experiments at home. His babysitter Tracy Leparulo suggested he perform them while she videotaped him. They then posted the videos on a YouTube channel they named Doctor Mad Science. Tracy thought the video practice would help his speech and gain a little confidence.

Today, Jordan writes his own scripts and chooses the experiments to perform. He has almost 20,000 subscribers on his YouTube channel, and a following on Twitter and Facebook.

“If you had told me six years ago that my autistic son who was non-verbal, had temper tantrums, and banged his head against the wall, would be giving lectures in front of hundreds of people, I would never have believed it,” his mom Stacey told the NY Daily News.

Jordan has grown into a confident scientist who wants to share his love and knowledge of science with his viewers. We enjoy following his journey and will continue to cheer him on in his endeavors.