The first images and video of a giant squid swimming in the ocean depths has been captured by a Japanese-led group of scientists, with support from the Japanese national broadcaster NHK and the Discovery Channel. 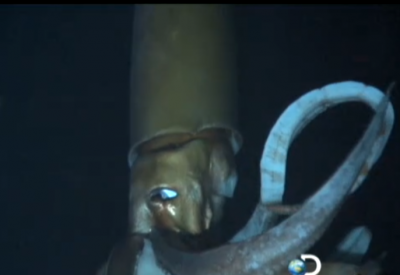 The squid was on the small side – only about 3 meters (10 feet) long. The largest ever found measured about 18 meters. The giant mollusk’s eyes are the size of a human head and it can weigh up to a ton.

Little is known about the giant squid, also believed to be the mythical Kraken in folk-lore stories. Researchers have searched for the real creature for years in hopes of learning more about the species. Giant squid have been found washed ashore but never fully observed in the ocean. No one has caught the beast on film in its natural habitat like this.

This cephalopod was found near the Ogasawara Islands, south of Tokyo.

The crew spent hours in a small submersible that used lights invisible to both human and squid eyes. At 630 meters, they lured giant squid using small squid as bait. After about 100 dives, the giant squid appeared. The sub followed it down to 900 meters (3,000 feet).

The footage will be aired for the first time in the Discovery Channel’s “Monster Squid: The Giant is Real.” The program premieres on Discovery at 8 p.m. ET Jan. 27th.

Inside Winter Wonderland – A Christmas Village Covered in Insta-Snow Density in Action: Can You Sink a Marshmallow?
Scroll to top
Create a new list