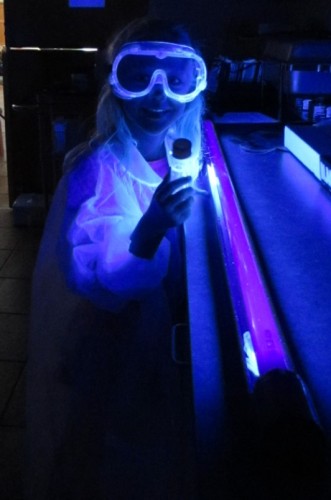 Self-proclaimed Mad Scientist Lab Coordinator and all around amazing mom Cara went above and beyond in planning her son Thomas’s 6-year-old birthday party this year.

Cara created a “secret lab” at her church. All attendees were given safety goggles & disposable lab coats (purchased from a medical supply store).

Thirty children, ages ranging from 4-7 years old, performed three experiments. They began their journey through the mad scientist lab by making Atomic Insta-Worms. Each scientist was given a Baby Soda Bottle to keep their worms and transport them home. After making the worms, they were led into a small room that was set up with several black lights to watch their worms glow.

The second experiment was making Shaker Slime. This gave each child a container to bring slime home. The shakers also put the children into the experiment, as they were the ones shaking and making the specimen.

The third experiment was launching water-pressure rockets outside.

The grande finale was Diet Coke and Mentos erruptions. Cara explains, “Man that got a huge reaction as they shot approx 20 feet in the air.  I was super happy I chose a place FAR away from the building.  We only did two explosions, but I could have done them all day long.”

The party wrapped up with cupcakes placed into the shape of a beaker. Cara also filled test tubes and beakers with bright colorful candy and placed them on the table. Each child also received a certificate that said “Professor XXXX is a Fantastic Funologist at THOMAS LAB.” 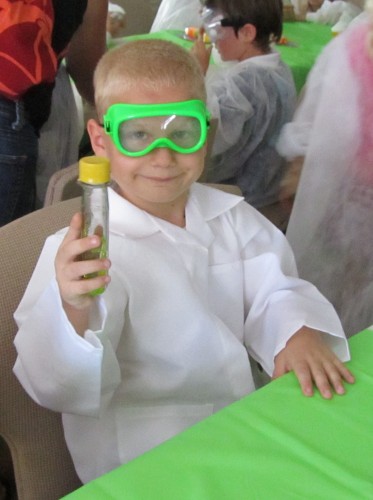 A small additional goodie bag was given out with a few more science related activities.  Even the dads in attendance had fun doing tricks with slime and worms. They held an informal contest to see who could stretch the slime the farthest. Usually, an elementary school party is not an exciting outing for dads.

Congratulations Cara and Thomas on a fun and educational birthday party. For more ideas and step by step instructions on how you can have a mad scientist birthday party for your little scientist, check out the Party Planning section of SteveSpanglerScience.com.

Spangler Unwrapped: Mintastic Episode Airs in September
Exploding Watermelons
The Perfect Gift for Budding Scientists – Do It Yourself or All in One Science Kits
The Ultimate Harry Potter Science Activities for Halloween or Birthday Parties Part 2
Water Flowing Uphill?
0 replies