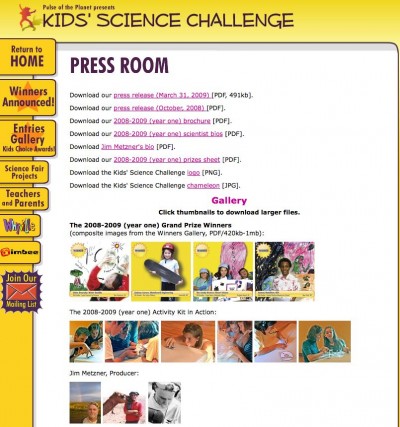 I first told you about the Kids’ Science Challenge back in January, and now we have some winners. We first got involved in the planning stages of the project when Jim Metzner, Executive Producer of Pulse of the Planet, contacted me to discuss the initial plans for the Kids’ Science Challenge and how we might get involved with the development of the science activity kits.

The Kids’ Science Challenge is a NSF-sponsored competition designed to stimulate interest in science in third to sixth graders. The competition launched back in October 2008. The winners have been announced. Here’s the information from the official press release…

Lindsay will be working with the skateboarders to see what would happen if you used balls for the wheels like on a Dyson vacuum. Skateboard engineer Michael Bream says “I’ve never seen anything quite like it in skateboarding before. There are several aspects that would need to be tested, including the size, position and composition of the ball. One of the main reasons we decided on Lindsay’s idea is that it’s one that would yield a lot of experimentation to get right, and both Paul Schmitt and I believe that this could actually result in a viable product.”

Claire’s question for the water specialist is “Can we test different stages of the water cycle runoff from grass and turf fields to see if one is more toxic than the other and if they could hurt plants, people, animals or ocean life?” Scientist Adina Paytan was impressed that Claire’s challenge was based on observations of the environment and posing questions that stem from these observations. Explained Dr. Paytan, “I will be working with Claire to design the experiments that will answer the questions she posed. Claire will collect runoff from various fields and analyze this water for pollutants. We will also try to get information from the city about the frequency of watering the fields and the use of fertilizers and pesticides to maintain the fields.”

Team Candy Doctors want to see if they can make a candy tongue depressor that will taste good, smell delicious and not make you gag when the doctor tells you to ‘Say Ahhhh.’ Flavorist Joan Harvey felt the students were creative in replacing an experience they don’t enjoy with one that would be more pleasurable. She’ll help the students to create the candy tongue depressor, which might even help soothe your throat!

Kamau’s question for the SETI team is “how can we communicate with extraterrestrials if we don’t know if they have a language similar to ours and if we don’t know their communication system?” A common phenomenon on Earth and other planets would be the sound of the physical environment. Should we send sounds from the earth, like rain, storms, lightning, or the ocean? The SETI Institute scientists will work with Kamau on recording, collecting and putting together a list of sounds he would like to include in a message to extraterrestrials. While at the SETI Institute, he will meet with scientists to discuss the “Sounds of Earth” that were included on NASA’s Voyager spacecraft that launched in 1977 and think about new sounds we might include that didn’t exist 30 years ago. Kamau and the team of scientists will put together a CD of his own “Sounds of Earth” that will be available on the SETI Institute’s website.

The Kids Science Challenge website serves as a resource for kids and teachers, who will be able to track the progress of the winners, play educational science games, watch videos about the basic principals of science, and win prizes. Even though the competition winners have been announced, kids now have the opportunity to vote online for their favorite entries in the Kids’ Choice Awards, which will be announced on June 1st, 2009.

In April and May, the winning students will meet with scientists and engineers at their labs, workshops and in the field. The public can post comments and questions in response to new videos of their interaction, which will be online in May and June.