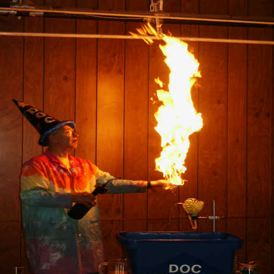 It was easy to spot Doc Gizmo as you wandered through the exhibit hall at the Colorado Science Convention. He was the only person dressed in a tie-dyed lab coat with multi-colored socks and a smile that beamed from ear to ear. Even before watching his program, there was no question that this guy had found his calling.

Doc Gizmo, whose real name is Phil Arnold, has been traveling around the Midwest for several years doing his science assembly program for a wide variety of audiences. Phil told the audience that his wife teaches chemistry and physics in Bucklin, Kansas, and he was recruited to build a few science demonstrations for her to use in the classroom. One thing led to the next and Doc Gizmo is traveling the Midwest with his science show speaking to anyone and everyone who wants to learn why science is fun.

During the hour long program for an audience of science teachers at the Colorado Science Convention, Doc Gizmo skillfully weaved a handful of classic science demos into a presentation that showcased the accomplishments of his wife and his core theme that science is fun. At the age of 75, Doc Gizmo’s character is that of a wacky science guy who isn’t afraid to dip his hand in some liquid nitrogen or even light his hand on fire while holding bubbles filled with methane gas. He offered a book of his science demonstrations and sold a few cases of his Newton’s Beads demonstration kit (Phil told everyone that you could buy it at Educational Innovations for $19.95 or pick one up for $6 after the show). Needless to say, Doc Gizmo was surrounded by a large group of people with six bucks in their hands.

The best take away for me was his twist on the classic Egg in the Bottle demonstration. Instead of light paper on first and jamming it into the bottle, Doc gently places a small candle into the top of the hardboiled egg and covers the candle with the inverted milk bottle. After a few seconds, the flame goes out and the egg is pushed up into the bottle. It’s a beautiful twist.

Phil was kind to include several demonstrations from my 1999 Reg Friesen Lecture at ChemEd as he closed his presentation. The Growing & Shrinking Head was a big hit and his presentation of the Afghan Bands was a great way to wrap up the show.

Hats off to the planning committee at the Colorado Science Convention for sharing Phil Arnold and his Doc Gizmo science show.