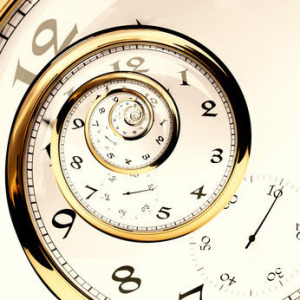 Oh, it’s called Chapter 10: The Perfect Tenses, but that’s just a cover for what it really is: our language’s ability to describe complicated scientific theories with just a handful of helping verbs.

I think it’s fascinating that what a scientist must explain with diagrams and long complicated essays and models, any one of us can demonstrate with a helping verb.

I love the whole concept of ‘time,’ anyway, and for this chapter, I try to remember to take three little Matchbox cars to class with me. I almost always forget, though, and I end up using something else to represent the little cars. Today I used tiny boxes of raisins, and pretended the little maiden on the cover was the driver.

To the car in back, both the other cars are in the future.

To the car in front, both the other cars are in the past.

To Superman, flying above, all the cars are in the present.

To the hitchhiker standing by the side of the road, each of the cars is in the future as long as they are moving, until which time they whizz past, one at a time, briefly sharing the hitchhiker’s present for a split second before zooming into yet another perspective of the future.

Scientists are still trying to figure out the whole space/time thing.  They haven’t figured out, yet, how to travel to the past or the future.

Writers have known how for years.

Our language makes this complicated concept of time into a relatively simple thing.  A tiny little helping verb can illustrate the past, present, future, and any combination thereof.

Back in the middle school, the students fought for the little cars or whatever substituted for them, after this lesson.

Today, at the college level, I asked if anyone cared to have the tiny boxes of raisins and every hand went up. And because I am ever the cool, level-headed, serious professional, I placed all three little boxes on the floor in the middle of the room and walked out. I heard chaos behind me but it really wasn’t any of my business.

Time. It may not be as linear as you think. I am sometimes more inclined to believe that time is more like a tree, or a spiral, than a flowing river. Yes, a tree that grows upward and at the same time puts out intertwining branches that touch, or don’t touch, or a spiral that coils round and round. . . .

Chapter 10: Non-Linear Time and Its Relation To Tiny Boxes of

Raisins Which I Understand Einstein Was Very Fond Of The Perfect Tenses.

It’s the same thing, you know.