Oh, the memories of geodes!  When I was a little kid, I played a lot in the alley that divided our block in two. All of us kids played in the alley. It gave us access to the back yard of every house in the neighborhood, and it was cool in its own right. 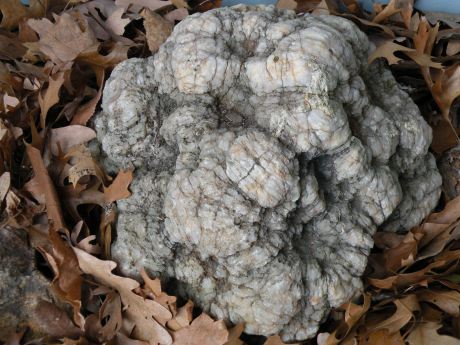 Alleys were always lined with sunflowers and hollyhocks. In, among, and around the trash cans were the occasional doghouse and small garden. The Pryors had a strawberry patch, which we kids never dared to bother.  There was one huge tree on the alley that was the meeting place for every bird in the county, just before dark. You could hear that tree all over town, as the sun was going down. It was also the only tree in the neighborhood that we kids never played under.

I never played in that alley without finding geodes. Where they came from each week I’ll never know, but every few days, after we’d gathered them all up and mined the diamonds out of them, more always appeared.

Here in southern Indiana, geodes are everywhere. You can’t plant

flowers without digging up geodes. Any batch of crushed stone you have dumped in your driveway will have geodes in it. It might also have arrowheads; you have to hire your young children to search for those. (That keeps them busy and in plain sight for HOURS; it’s fantastic.)  We can’t mow the lawns here without dulling the blades on geodes.

Geodes come in all sizes and colors; some are as small as marbles, and others are absolutely immense.  I’ve seen people using huge geodes for seats around an outdoor table.  Geodes the size of basketballs on fence posts are a common sight here.  I’ve seen geodes larger than grown men.  People here – including me – line their flower beds with geodes the size of cauliflower heads. 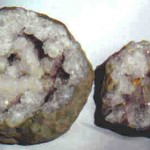 We kids used to gather a pile apiece and take turns ‘busting’ them open with a hammer. The inside is usually a wonderment of sparkly delight. Look up ‘geodes’ and check out the pictures; no two are alike and all have something enchanting inside. We used to pretend we were finding diamonds and rubies and emeralds; once in a while, there will be real amythyst in there.

Clean them, and polish them, and put them where they catch the light. The jewel-lined cavern inside a geode will enhance your dreams and make your wishes come true.

I do love finding the geodes, though. You can’t tell by their outsides, what they’ve got on their insides, but you do know that no two are alike, and they’re all beautiful.