I’ve carried my Spangler Science Spot Dot Red Thumb in my purse or briefcase for six years. I like to keep it with me because I use it. A lot. 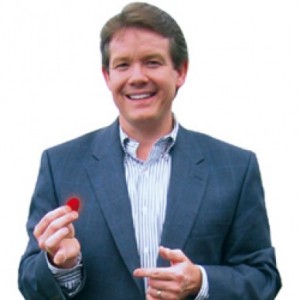 I use it when I lecture because my students can’t keep their eyes off it and it keeps them awake. I love the looks on their faces; they’re not sure if they’re really seeing the red spot dot or not.

I am not above using it in public to mess with people’s minds.

My sister uses it when she directs her many show choirs. A choral music director with a red Spot Dot not only keeps the singers’ attention; she looks really cool. REALLY cool.

My brother is a musician and plays in several bands. (When he’s not busy being Director of Finance at a university out west, that is.) With a red Spot Dot flashing away at intervals during his bass guitar riffs, all eyes are on him and the scenario is, again, really cool.  Their drummer has one, too, and the effect is just as awesome as you might imagine.

Now, keeping the Spot Dot Red Thumb in a purse along with other things that are probably considered unconventional probably isn’t the best place for a Spot Dot to live all the time. Over the years, mine turned really dark, and it became more and more difficult to make it look like my real thumb. A few weeks ago, my classroom computer was being serviced by one of the IT guys, and I noticed that he was missing the thumb on his left hand. I also noticed that what was left of his thumb matched my Spot Dot. Perfectly.

Of course, the Spot Dot won’t work as a prosthesis, but it does create an interesting effect when the person working on your computer seems to be able to take his very natural-looking-if-you’re-from- Mars thumb off and on at will.

Oh, and he likes to make it glow and pretend he’s being electrocuted.

Never think for a moment that anything has only one kind of use. If you use your imagination, everything is game. Sometimes, things are fair game.