We all remember the feeling of sitting at desks while the teacher returned a test or important paper. I held my breath waiting to catch a glimpse of that red mark on the top of the paper…was it an A or even an A- or lower? Those red marks and red grades are a source of stress for almost all students. Is red ink on a paper damaging to student confidence and motivation? 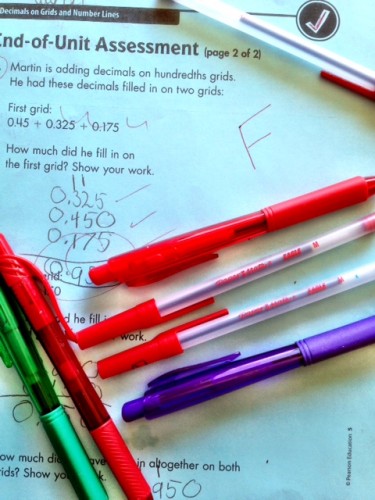 An unnamed secondary school in London recently banned teachers from using red ink on papers in case it upset or discouraged the students. The ban was set by a head teacher at the school.

One of the classroom teachers brought this ban to Bob Blackman, a Tory (conservative) member of Parliament, and he brought the issue before Parliament.

Blackman is against the ban and explained, “A teacher contacted me and said ‘I cannot believe I have been instructed by my head to mark children’s homework in particular colours and not to use certain colours. It is all about not wanting to discourage youngsters if their work is marked wrong’  It sounds to me like some petty edict which is nonsense. It is absolutely political correctness gone wild. My take on all this is to say children need to understand the difference between what’s right and what’s wrong.”

The issue does have its supporters in the education world. A Florida teacher chimed in the discussion by saying, “I do not use red. Red has a negative connotation, and we want to promote self-confidence. I like purple. I use purple a lot.”

The red ink issue is global – teachers in Queensland, Australia were given mental health kits in 2008. The kits suggested teachers avoid using red pen, because it can be seen as aggressive. Some students say they feel less than perfect when they see red corrections on their work.

Are students being coddled and protected by these types of over political correctness? What will happen when they grow up and become a member of society and the work force? I’m not sure they will be able to handle any criticism without getting offended. Part of getting an education is learning from mistakes and adjusting to criticism.

Keep in mind that red does stand for stop, while green for go. Maybe green pens should be banned so students don’t get confused and feel too positive with their grades.

A study in 2008 European Journal of Social Psychology claimed grades would be higher if teachers graded in blue ink vs. red. It suggested that red pens may potentially make teachers more likely to spot errors on tests and be more critical. The use of a red pen triggers the teachers’ brains to focus on failure.

I do still remember the feeling of receiving a paper covered in red marks. It definitely didn’t feel good and did upset me. But it also motivated me to work harder the next time and eliminate some of the red marks on the next try. Errors should not be treated as defeats, but a second chance. There is always another test or another essay to redeem yourself. It’s all in the way students are trained to react to all of those marks, whether red or green or purple.

What are your thoughts? Should red pens be banned in education to protect students’ feelings and remove some of the focus of being wrong? Or are learning from your mistakes one of the best lessons a student can gain while in school?