We are lucky enough to live in a wildlife reserve in Malawi that over the last ten years has been restored, rehabilitated and restocked. More than 2,500 animals have been translocated here and there is a lot of excitement that surrounds animal reintroductions. 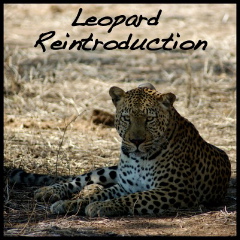 The latest relocation was two leopards that were moved from South Africa to Malawi in November 2012. They take the total leopard population in the reserve up to six. The first two arrived in October 2011 and the second two in December 2011. Before that there had been no evidence of leopards in this reserve since the 1990s (however they are still found in other areas of Malawi). The reserve has a great leopard habitat and leopards used to occur here in good numbers but poaching and habitat encroachment drove them away. Now that the reserve is protected by the Malawian Department of National Parks and Wildlife, with support from a conservation project, it is a safe place for these predators and we are thrilled to see them return to the area.

All of the leopards that have been relocated were donated by the South African government and came from a predator rehabilitation center in South Africa. They were removed from their respective homes because they were considered “problem animals,” and since the rehabilitation center does not have the space to keep them indefinitely it searches out viable new homes for them. One of the leopards was living on a game farm and developed a taste for ostriches which the owner didn’t like very much and so had to be removed. Another was living near a tourism lodge and started killing impala on the lawn right outside the lodge so was considered a potential danger if tourists happened to be in its way. All of the leopards have their own story of why they were removed and we are thrilled that we get to share our home with them.

A lot of work goes into moving a leopard across international borders. Once the two most recent arrivals were identified for a move to Malawi the rehabilitation center quarantined them for one month. During this time they were de-wormed, immunized and treated for any illnesses they might have. It is especially important to ensure that leopards that could transmit any feline diseases are not moved to another country. 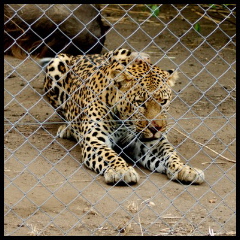 When it is time to move the leopards, they are first immobilized with drugs administered through a dart gun. While immobilized they are put in crates and sedated for their six hour flight. The sedation helps reduce the stress that the move puts on them and keeps them from injuring themselves. If they were not sedated they would try to get out of their crates and could easily hurt themselves in the process. When they arrived at the reserve they were immediately taken from the airstrip to the leopard boma. This is a purpose-built enclosure to hold them for two to four weeks before they are released into the 70,000 Hectare reserve. The boma is one twelve by twelve meter structure that is divided into two holding areas. It has walls and a roof made out of diamond mesh wire and an electric hot wire that runs around the interior walls. The entire structure is surrounded by another electric fence to keep other wildlife out. The wall separating the two holding areas is also made of diamond mesh wire fencing that is covered with reed mats so that the two leopards can’t see each other, they can however hear and smell each other. They need to be separated in the boma because the fact that they are in an enclosure and in a new place puts them under stress and that stress could cause them to attack each other. 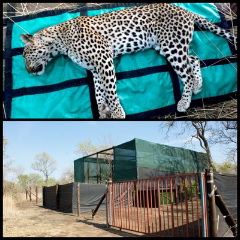 There is a dual gate system for each side of the boma. Initially this is used to get the leopards into the boma. The crate holding the leopard is put in between the two gates and opened when the inner gate is opened and the outer gate is closed so that the leopard can leave the crate and move into its side of the boma without endangering the project staff who stay safely outside the boma. Leopards can be very dangerous animals, especially when they feel threatened or trapped. While the leopards are in the boma they obviously cannot hunt for themselves so the dual gate system is also used to feed them. Fresh meat is placed in the area between the two gates and after the outer gate is closed and secured the inner gate is opened so that the leopard can retrieve its meal. The leopards are fed every three to four days. Each side of the boma also has a resting bay, a watering hole and a climbing tree. 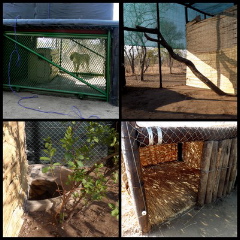 Before the leopards are released they are fitted with tracking collars that contain both a GPS and a radio transmitter. Sometimes they need some encouragement to leave the boma that they have become accustomed to so they are not fed for a couple of days before they are released and a fresh kill is hung in a tree near the boma on the day of their release. The gates are opened and either hunger or freedom or both entice the leopards out.

Leopards blend extremely well into their surroundings and are very difficult to see once they are released into the reserve. The collars send regular GPS waypoints so the park management staff have a good idea of how the leopards are doing without seeing them. It is a good sign to see that the leopards are active and moving and that every few days they stay in the same place for a little while – this usually means they have made a kill and are feeding. If the GPS aspect of the collar malfunctions or if there is no movement for longer than is normal, the radio transmitter in the collar allows project staff to track the leopard on foot. They are also regularly monitored on foot, especially just after release, to make sure there are no problems with the collars and to see the remains of their kills so project staff know what they are eating. 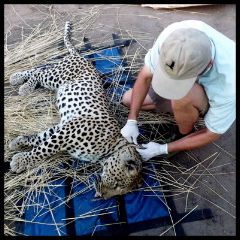 My daughters and I love to go see the leopards when they are in the boma. We look through peepholes cut into the screening surrounding one side of the boma so that we don’t disturb or upset them. We have yet to see any of the released leopards but one morning we did find leopard tracks at the waterhole right in front of our house. Before the relocation we spent a lot of time making leopard crafts and learning about these beautiful felines. Even though they are difficult to see we are so happy to know that they, along with the lions that were also reintroduced in 2012, are here. There is no evidence that cheetah ever occurred in this part of Malawi so all the big cats that historically lived in this area have now been returned to the reserve. We hope their populations will grow to what they once were. 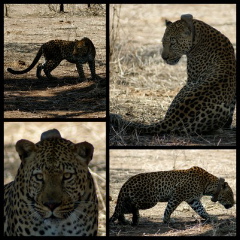 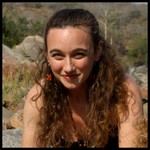 Jody Tilbury is a stay-at-home mom, raising two girls in a wildlife reserve in Malawi. Pre-motherhood she worked with international and environmental education. Jody is homeschooling her daughters and enjoys sharing her love of other cultures, nature and conservation with them. She writes about their adventures at Mud Hut Mama. 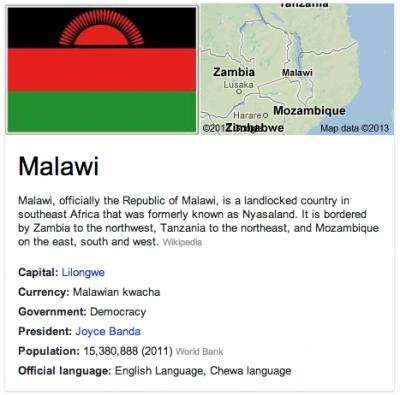 The Science Behind Snowflakes Claims Made on Facebook Can Damage a Teacher's Reputation and Ultimately...
Scroll to top
Create a new list