The turkeys are all defrosting (or at least should be) and come bright and early Thursday morning, millions will be cooking in ovens across the United States. The turkey is the star of our Thanksgiving holiday, so we asked the following questions to find out the science behind it. What is the best way to cook a turkey and why? What happens in the oven while the turkey is cooking? 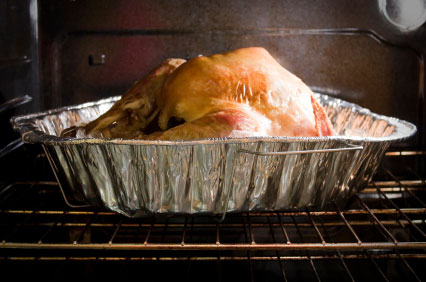 Anatomy of a Thanksgiving Turkey

Most of a turkey consists of water (about 60% or three parts water to one part fat and one part protein). The water is in the cells of the turkey from the skin to the bones to the muscle and the fat. The meat of a turkey is muscle fibers, connective tissues and fats. The muscle fibers consist mostly of two proteins – myosin and actin. As the muscle tissues are cooked, the proteins start to denature, causing the proteins to coil up and contract the muscle.

When the contracting muscle fibers reach 180° F they begin to break up. The bonds within the molecules begin to break down, causing proteins to unravel and the muscle meat becomes more tender. Of course the longer the turkey is cooked, the more the proteins are denatured and the meat gets tougher.

Connective tissues are not digestible and are too tough to bite through before they are cooked. After the cooking process, the collagen tripe helices are destroyed and the collagen becomes soft gelatin.

As you cook the turkey, muscle fibers contract until they begin to break up at around 180 degrees Fahrenheit. Bonds within the molecules begin to break down, causing proteins to unravel, and the dense muscle meat to become more tender. Collagen in the bird (one of three protein fibers that attaches muscles to the bone) breaks down into softer gelatin molecules as it unwinds.

If a turkey is cooked too long, the muscle proteins coagulate within the meat and cause dryness.

In all of our research, we learned that moisture is the most important piece behind cooking the perfect turkey. It’s also the most challenging. A dry turkey can ruin the meal but an undercooked, bleeding turkey can do the same. So how do you cook a moist and delicious turkey?

Liquid evaporates during cooking through a process called moisture migration. Poultry produces inject their birds with broth and other ingredients before selling them to keep as much moisture as possible in the meat.

The broth contains salt, which helps the bird’s ability to hold in liquids. Some turkeys are also injected with sodium phosphate. This shifts the pH of the bird and pushes protein filaments away from each other to leave more space for liquids.

Fresh turkeys will also be more moist. Freezing ruptures cells and allows liquids to escape. To counter act the freezing process, you can inject your defrosted turkey with broth and flavorings or soak it in a salt-water bath (brining) for a couple of days in the fridge. This will restore some of the moisture and add flavor to the bird. Just don’t overdo it. Too much salt can seriously adversely affect the moisture and texture. Salt will also draw out moisture and is used in curing – think bacon and prosciutto. A sprinkle of salt will cause small droplets to form on the meat’s surface.

I have always brined my turkeys the night before Thanksgiving. It does give the turkey extra flavor and moisture. But the brining process can be messy and difficult. I use a plastic cooking bag and fill it with salt, water, seasonings and orange and lemon slices. Then place the turkey inside the bag and the bag inside the roasting pan to hold it all together.

Dark roasting pans absorb more heat and will cook a turkey faster. Aluminum foil will deflect heat and slow cooking. A large pan that touches the oven walls blocks the heat waves. Turn the pan while cooking to compensate for issues that may cause variations in cooking temperatures.

Using a lid will raise the temperature inside the roasting pan and will cook the turkey too fast. The lid will also hold in too much moisture and prevent the skin from crisping. The surface of the turkey must reach 300° F to 400° F (149° C to 205° C) to crisp, which is a much higher temperature reached inside the turkey.

Basting is supposed to help the meat stay moist during cooking. This is a myth. When you shower, water flows over your skin. It doesn’t pass through it and into your body. The skin of a turkey is just as water-repellent.

Basting does work to spread the fat to speed up cooking because fat is a conductor of heat. The water in the juices slows down the cooking the same way your skin cools down when water evaporates off of it. Baste legs and wings with the hot liquid right from the pan, but let the juices cool down before you use them to baste the breast. This will help maintain some moisture, add flavor and keep your turkey cooking correctly.

Scientists have discovered that one of the most beneficial effects of basting comes from opening the oven door and releasing some of the heat. The temps can drop 100 to 150 degrees and it may take the oven 10 to 15 minutes to recover, giving the meat time to rest.

The preference over white and dark meat is as deeply rooted as decaf or regular and wine or beer.  The two types of meat are as different as well, light and dark and could come from two different animals. Each type also cooks better at different temperatures and times.

White meat is found in the breast muscles of a turkey. It is fine, lean and oversized after centuries of breeding. Turkeys don’t fly, so the breast muscle isn’t used much and doesn’t contain much connective tissue. Turkeys can fly, but usually only use it to escape predators. The muscles produce a lot of power and fatigue quickly. The breast should be cooked at a high temperature to bring out flavor and for a short time to keep it from drying out.

Dark meat found in the legs and wings has a lot of connective tissue and fat. Turkeys spend a lot of time walking on the ground. The leg muscles are made of red muscle fibers that are adapted for regular and continuous use. The protein uses oxygen to relax/contract so this tissue is rich in capillaries, which give it a deep color and rich flavor. Dark meat contains a lot of myoglobin and is rich in mitochondria, which produce energy for the muscle tissue.  For example, a marathon runner would be expected to have a higher percentage of red fibers in his leg muscles compared with the muscles of a sprinter.

The dark meat should be cooked at a lower temperature for a much longer time to allow the connective tissue to break down.

There are a few methods to slow down the breast cooking and even out your turkey.

1. The best is to take apart the turkey and cook the dark and white meats separately.

2. Place aluminum foil over the breast during cooking to slow down the process and allow the dark meat to cook longer. Just remember to take the foil off the breast near the end of the cooking cycle.

3. Insert stuffing in-between the skin and the breast meat to insulate and slow down the cooking. Take the hot stuffing out as soon as the turkey comes out of the oven. The stuffing will continue to cook the meat and overcook the breast.

4. Place an ice pack on the breast for about 30 minutes before cooking. The breast will start out cooking with a temperature difference and should cook slower than the dark meat. Add about 15 to 30 minutes to the cooking time.

When is a Turkey Cooked Fully?

Why Should a Turkey Rest Before Being Served?

The temperature will rise inside a turkey after it is removed from the oven. Letting the turkey sit for 10 to 20 minutes and rest (cooking is hard work!) will allow the juices to settle and make the meat easier to carve. This gives you time to warm the rest of the meal so it all hits the table hot and at the same time.

Where Does Flavor Come From?

Aroma is the largest part of flavor. It is dominated by small volatile molecules that come from cooking the proteins. The cooked turkey flavor or aroma begins at 140°C. If the temperature exceeds Meaty aromas are mostly generated through a series of reactions between proteins and sugars known as Maillard reactions.

The Work of Scientists: Reasons to Read and Write Creating Unforgettable Learning Experiences
Scroll to top
Create a new list