Glow sticks are incredibly popular for their simplicity yet versatility – birthday parties, evening outdoor activities, Halloween science and so much more. They are sold at many events and are found in stores everywhere. Even Steve Spangler Science sells glow sticks. 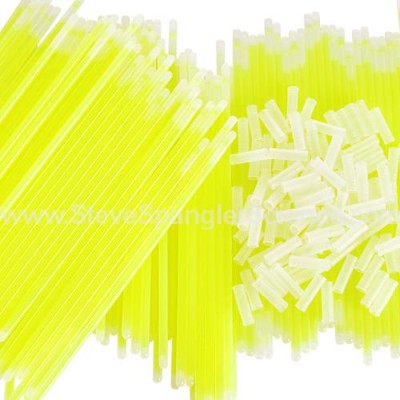 Kids love cracking them and watching the light glow like a firefly.

In watching blogs and sites like Pinterest for science experiments and activities to share, I have come across several how to’s that involve breaking open glow sticks. One involves adding the goo from glow sticks to bubble solution.

This is not a good idea.

Are glow sticks safe?
They are safe, as long as precautions are followed and the chemicals are kept inside. Cutting open a glow stick can also cause the broken shards of glass to fall out.

Packaging on glow sticks says they are non-toxic. However, the safety warnings on glow sticks read not to puncture or cut the plastic cover on the glow stick. Keep the chemicals contained, and glow sticks are a safe activity.

Glow sticks contain chemicals. Not deadly dangerous chemicals, but chemicals that should be handled and treated with respect. Some glow products use a chemical called dibutyl phthalate. Other glow products contain a small glass vial inside the plastic tube that contains a mixture of hydrogen peroxide in phthalic ester. Outside of the glass vial is another chemical called phenyl oxalate ester. When the tube is cracked, the glass inside is broken and the chemicals all mix together in a reaction that causes the glow. 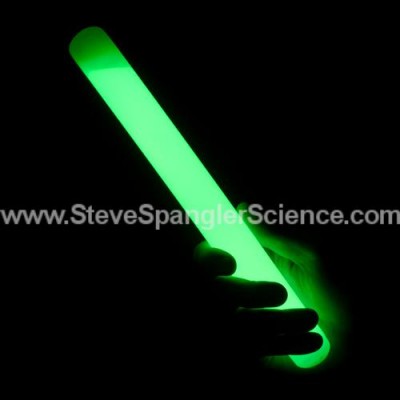 Dibutyl phthalate is used to help make plastics soft and flexible. It is also used in glues, nail polish, leather, inks and dyes. 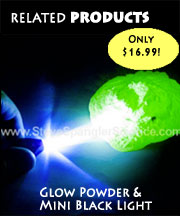 Phthalic ester is a substance that is added to plastics to increase flexibility, durability and transparency. Phthalates are being phased out in many products due to health concerns.

Phenyl oxalate ester is responsible for the luminescence in a glow stick. The reaction with hydrogen peroxide causes the liquid inside a glow stick to glow.

What are the Dangers?

These chemicals can sting and burn eyes, irritate and sting skin and can burn the mouth and throat if ingested. If the chemicals are ingested or spilled in the eyes or on the skin, it is recommended the area is rinsed with water and the local poison control center contacted.

The chemicals can also cause harm to your pet if a pet chews or ingests a light stick. They taste really bitter, so your pet probably won’t continue chewing or eating the chemicals inside. Watch the pet for excessive drooling or eye or nose irritation.

Poison control centers report that they get numerous calls about potential glow stick poisoning around Independence Day and Halloween.

Like I mentioned earlier, we love glow in the dark activities. We even sell an entire line of glow in the dark science toys. But we want to stress that when using any types of chemicals, the proper precautions and warnings are followed to ensure safe science.

So what if you want to re-create these cool ideas found on the web and Pinterest? Find a glowing substance that isn’t as harmful as those found inside glow sticks. Tonic water is completely safe and will glow under a black light.

At Steve Spangler Science, we sell Glow Powder, which is zinc sulfide. This powder can be mixed with liquids like glue to make almost anything glow in the dark. The best thing about Glow Powder, is it will work over and over and over again and not die out like the glow in glow sticks.

Zinc sulfide is non-toxic, but it still isn’t a good idea to add it to bubble solution or get it near faces, especially the eyes and throat.

Treat all chemicals with caution and care, no matter if they are listed as toxic or non-toxic. An adult should always be present when using chemicals and proper safety materials like safety glasses and gloves should be used when recommended to protect eyes and skin.

Keep in mind that this is not an attempt to sell our glowing concoctions. You do not need to purchase it from us. Google zinc sulfide and purchase it elsewhere if you’d prefer, just don’t crack open glow sticks to get glowing solutions.

Glow in the Dark Bubbles

This idea is very cool and we have tried in our Spangler labs to make glowing bubbles ourselves. But this just doesn’t work. You can make the solution glow in the dark, but once the bubble is blown, the walls of the bubble are too thin to reflect the light and glow. We have also tried over the counter glow in the dark bubble solution found in many stores. Again, the solution glows, but once the bubbles are blown, they do not glow. Although this activity sounds like a lot of after dark fun, it can be dangerous, especially if the solution is accidentally swallowed or blown into the eyes. We recommend you keep the glow in the dark chemicals and the bubbles separate for safety.

A safer alternative for glow in the dark bubbles, if you still want to try it, is to use Tonic Water. Tonic Water is safe to ingest and will glow under a black light.

A few years ago, a video surfaced where a guy mixed hydrogen peroxide and baking soda with Mountain Dew. When he mixed it, the solution glowed, showing Mountain Dew glowed in the dark. This was proven a hoax almost immediately after it surfaced. Wired.com and Snopes.com both posted explanations for how this prank worked.

The prankster slipped the liquid from a glow stick, like Phenyl oxalate ester, into the Mountain Dew. When the hydrogen peroxide and ester mixed, the solution began to glow. The Mountain Dew had nothing to do with the substance glowing.

So if someone offers you a glowing Mountain Dew, refuse it!

Save Electricity, Skip the Campfire, Go Old School and Cook on a Solar Oven Will I Get a Sunburn on a Cloudy Day? Testing the Power of the Sun with Energy...
Scroll to top
Create a new list